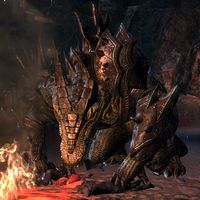 Horvantud the Fire Maw is a gigantic armored Daedroth found in City of Ash II. Horvantud has a chance to drop the unique item Fire Maw's Fang. 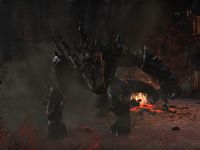 Jagged Claw
A basic melee attack that does minor physical damage.
Fiery Jaws
The daedroth bites the player, doing moderate physical damage. This attack also applies the "Burning" effect, which does minor flame damage over time.
Fiery Breath
The daedroth breathes fire, doing moderate flame damage over time to all players in front of it as indicated by a red cone.
Ground Quake
The boss pounds the ground causing quakes to appear under the player's feet and around the arena, dealing moderate physical damage as indicated by red circles.
Tremor
The boss stomps, causing shockwaves to travel out from itself dealing moderate physical damage and staggering all players hit.
Summon Dremora
Throughout the fight as its health drops, various Dremora will jump down to attack the group. They will disappear once the boss dies. The group should balance damaging the boss and killing the Dremora summoned. Alternatively, if damage is high enough, the group can choose to focus the boss only before the damage from the adds becomes overwhelming.
Shield
At 20% health, the boss summons a shield around itself that must be broken by damaging it.

Various dremora will say the following as commentary during the battle, though Horvantud himself does not speak:

"Show them how we treat visitors to the Deadlands!"
"Come! We'll deal with you ourselves!"
"The flame of the Fire Maw burns like a second sun!"
"Break them! Break the mortals!"
"The Fire Maw will purify you."
"Writhe in fire!"
"Envelope them in flames!"
"Let the flames consume you!"
"You think you'll survive this?"
"Come, greet the new day, and die!"
"Prepare to greet the new day and burn in it."
"Come and greet the new day. It will be your last."
"Prepare yourselves for the end!"
"Let the battle be joined!"

They have several achievements associated with them: