The UESPWiki – Your source for The Elder Scrolls since 1995
< Elder Scrolls Online: Places: Auridon / Mines / Delves
Jump to: navigation, search

Kinlady Entila of Clan Auralus had a vivid dream that beneath the coastal cliffs near Skywatch was a fabulous fist-sized gem, the Egg of the World. Based on the directions in her vision, she hired a score of miners to dig until they found it. The funds of Clan Auralus ran out first. 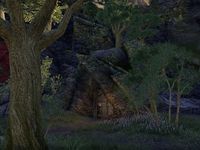 Entila's Folly is an abandoned mine in central Auridon, just southwest of the city of Skywatch containing spiders. It has recently become infested with spiders, as well as a somewhat crazed Khajiit. 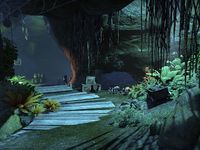 The interior of Entila's Folly

This Elder Scrolls Online-related article is a stub. You can help by expanding it.
Retrieved from "https://en.uesp.net/w/index.php?title=Online:Entila%27s_Folly&oldid=2088421"
Categories:
Hidden categories: