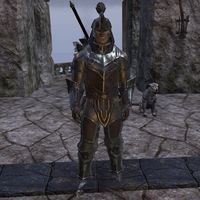 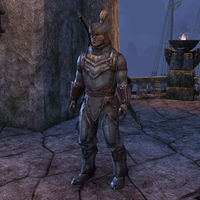 Chief Tazgol is the Orc chief of the Seamount Clan, the ruling force on the island of Betnikh. He can be found in the Stonetooth Fortress. He initially refuses to join with the Daggerfall Covenant, but may eventually be persuaded to.

If you speak to him before starting the quest, he'll say:

"You stand on Orc soil, outlander. Tread carefully. This is not a good time to visit our island."
What happened?
"Vile scum called the Bloodthorn Cult attacked. I got the name from one of the survivors before I split his skull. They're necromancers, defilers of the dead.
We taught them a lesson. They won't be back."
Why did they attack?
"Mauloch only knows. And I don't care. Whatever the reason, they died poorly and in great numbers."
Did they take anything?
"A few broke into my library, probably just to hide. Some old Breton scrolls are missing, likely destroyed in the attack.
Breton scrawlings, bah! If they came for those, they wasted their lives."

Return to the fortress after defeating Vardan. if you decide to keep the relic, he'll say:

Chief Tazgol: "So you decided the fate of the relic."
"What did you decide about the relic?"
I decided to keep it. The Covenant needs it.
"I disapprove. Many of my people had their souls consumed by that thing. You have condemned others to the same fate.
Even so, you saved my tribe. For that, I will respect your decision. Without you, we would all be dead."

Chief Tazgol: "So you decided the fate of the relic."
"What did you decide about the relic?"
I destroyed it. No one will ever use it again.
"The only correct choice. War should be honorable. There is no honor in the use of such a device.
You have saved my tribe and my island. For this, I owe you a great debt."

"I hope you made the right choice. It is done. Other matters concern us now."
What's next?
"Your actions have revealed a vulnerability.
I thought my tribe safe on our island. This Bloodthorn attack proved me wrong. Only you and your friends on the Spearhead, united, were able to save this island."
What are you asking me to do?
"Months ago, Sir Lanis offered membership in the Daggerfall Covenant. I refused. You showed me I was wrong. We need allies.
I would ask you travel to Glenumbra and give Sir Lanis my petition to join. I have ordered Captain Kaleen to sail you there."
I'll forward your petition to join the Daggerfall Covenant.
"By trusting you with this petition, I acknowledge your actions to save my tribe. I trust you to deliver it intact."

Speaking with him after the quest if you destroyed the Ayleid relic at Carzog's Demise:

"One less Ayleid Relic to plague our world. Good!"

If you decided to keep the relic:

"I hope you made the right choice. It is done. Other matters concern us now."

This Elder Scrolls Online-related article is a stub. You can help by expanding it.
Retrieved from "https://en.uesp.net/w/index.php?title=Online:Chief_Tazgol&oldid=2328685"
Categories:
Hidden categories: