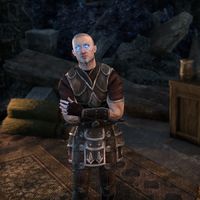 Captain Regilus is an Imperial member of Legion Zero. He is acting as a spy for the Drake of Blades, although he was forced to drink the Blood of Coldharbour as an initiation and is slowly becoming mind-shriven. He can be found in the Elven Gardens District of the Imperial City.

When you daub the Dragonguard sigil on a wall, Captain Regilus will call out to you,

Captain Regilus: "I'll meet you at the hideout. Don't dally."

When you enter the safehouse, Captain Regilus is hunched over. Trying to fight his condition.

"Keep your distance! I'm sorry. I don't know how much longer I'll have control."
Are you all right? What happened to your eyes?
"Nice to meet you too. Do you always lead with indelicate questions? I tend to introduce myself first. First impressions and all that.
Sorry … it's been a long week. I'm Captain Regilus. I'm assuming you're working with the Drake of Blades?"
Yes. She sent me out to look for you.
"I figured.
I'd have met with her before, but it's getting too dangerous. I can feel myself succumbing to Molag Bal's corruption. I thought I had it under control, but …. Listen—the Daedra have found a key."
A key to what?
"An ancient door, deep beneath the city. I've heard the leadership talking about it. Nothing solid. Just whispers about a relic, locked up tight.
I'm tempted to simply steal this key, but I think we'll have better luck if we make a switch."
What did you have in mind?
"I made a key mold. It was a risky play, but I was running out of ideas.
If you can make a false key and switch it out with the real one, it should keep the Daedra off your back for a while. Give you a chance to learn more about this relic.""
So you want me to make a fake key?
"Yes. I'll give you the mold. If you can get your hands on some scrap metal from these soldiers, you should be able to cast the key in the western forge. Once it's made, we swap it with the genuine article and no one is the wiser.
Although …."
Yes?
"If it's fresh from the mold, it won't look as worn as the actual key.
After you cast it, bring the fake key over to the laboratory on the northwest side of the district. You can give it a good acid bath there—some pits and scars will sell it."
Forge a false key, then treat it with acid so it looks old. Got it.
"When you've got the key ready for the switch, meet me at the groundskeeper's storehouse. We'll go over the rest of the details there."
I'll meet you there after.

You can then ask him more about himself.

"You'd better get moving. The more time you take, the more time there is for things to go wrong."
So, what happened to you?
"Right … that. I had to drink the Blood of Coldharbour to maintain my cover in Legion Zero. Tasted like a dead-man's breath over ice. I wouldn't recommend it.
It changes you Not just in body, but in mind."
Why haven't you succumbed to it?
"Antidotes, potions, herbal remedies … anything I can scrounge up. It's not pleasant. If the corruption doesn't kill me, these remedies will.
That only gets me so far, though. It's really about willpower. And even that has limits."
Why go on with it?
"Stubbornness, mostly. I can still be useful. Plus, I don't want to give them the satisfaction of turning me.
They'll find me out eventually, of course. When they do, I'll have my dagger ready—first for the one who outs me, and then for myself."

Speaking to him before heading out:

"You better get moving. The more time you take, the more time there is for things to go wrong."

After completing your objectives, you meet him in the groundskeeper's storehouse:

"There you are. I was beginning to think you'd been caught."
How are you holding up?
"Are you mad? How do you think-? I'm... I'm sorry. I'm keeping together. Don't worry about it. Did you make the false key?"
Yes, I have it right here. What's next?
"They've locked the key away in the old counting house. A Xivkyn named Zolgar the Brutal keeps watch over it. I'll unlock the door and distract him while you slip in and make the switch. When it's done, meet me back in the sewer hideout."
All right. Good luck.

While you go to switch the keys, Captain Regilus will approach Zolgar the Brutal,

Zolgar the Brutal: "What is the meaning of this interruption, wretch? My watch is more important than your inane reports!"
Captain Regilus: "Apologies, exalted one. This report is urgent. I have reason to suspect that there may be a spy in the ranks of Legion Zero. One who plots the downfall of the Legion and its masters."
Zolgar the Brutal: "A spy? I am charged with the protection of a great prize. I have no interest in petty mortal schemes, you half-witted cretin!"
Captain Regilus: "As you say, exalted one. I merely thought it would be to your benefit to learn of this first. If you prefer, I can take the news to one of my other masters though—it would pain me to see them take the glory in your stead."
Zolgar the Brutal: "Glory you say? My lord Molag Bal does have a special distaste for traitors. Hold a moment, Captain—perhaps I can spare time for this so-called plot. Tell me about this spy. I will see you duly rewarded for your loyalty."
Captain Regilus: "I dare not say it out loud, my lord—ears are everywhere, you know. Anyone could be listening."
Zolgar the Brutal: "Whisper it to me then. Who is this spy? They must be made to suffer."
Captain Regilus: "The spy's name… is Captain Regilus!" 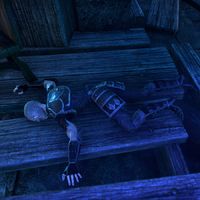 Speak with him back at the hideout.

"Any problems with the switch? I hope not, I can't quite pull that off twice."
What happened back there? I thought this was supposed to be quiet.
"I'd say I don't know what came over me, but I do. It's the corruption taking hold.
I … I killed him, but at least it was behind closed doors. This will work to our advantage. There will be infighting as they try to figure out who murdered Zolgar."
So what now?
"Bring the key and this report to the Drake. It's everything I have written down on what we accomplished.
As for me, I'm too much of a risk now. I'm losing control of myself and I can't be allowed to tell them what we did."
What are you going to do?
"You and I both know what needs to be done. Thank you for helping me complete one last mission."
I understand. Goodbye, Captain.
"Oh—and when you see the Drake, tell her …. Never mind. Just look after her, all right?"
I will.

He will then drink from a bottle laced with poison, killing him.