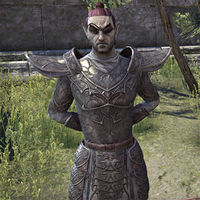 Battlemaster Rivyn is a Dark Elf who can be found at any of the Gladiator's Quarters in Alinor, Daggerfall, Davon's Watch, Rimmen, Solitude, Vivec City, Leyawiin or Vulkhel Guard.

Alternately he can be found outside any of the three Battlegrounds on Vvardenfell.

Talking to him for the first time, he'll say, "Welcome! You stand amidst the Circle of Champions, a guild formed to test the greatest fighters of the realm in games of skill. Do you have what it takes?"

I'm interested.
"Well then, let's see what you're made of! Participate in one of our games at any of our Battlegrounds. Win or lose, doesn't matter. Just get your feet wet. I can offer you a greater challenge after you've learned the ropes."

If you talk to him again before finishing your first game, he'll say, "You'll never understand the Battleground until you see the games firsthand. Get out there and participate!"

I'm looking for a challenge.
"For this challenge I want you to participate in five matches. Use this time to focus your strategy. Let the bond between your team grow without the concerns of victory holding you back.
Win or lose, you'll be rewarded if you complete this task."
I'll return when I've participated in five matches.

Once you have completed five Battleground matches you can return to Battlemaster Rivyn.

"How fare you in today's battles?"
I've completed your challenge.
"As with any skill, practice makes perfect. It's important to stay sharp out there. Champions don't just spring up overnight!
You've earned your reward."

I'm looking for a challenge.
"For this challenge I want you to focus on your personal contribution to your team by earning Medals. Working together is key to any triumph, but each player must pull their weight. Return to me when you've shown your worth."
I'll return when I've shown my contribution to my team.

After getting at least 1000 medals in Battleground matches, return to the Battlemaster.

"I knew you had the right stuff!"
I've completed your challenge.
"Well done! Though a team is made of no single individual, it's still important that each spoke in the wheel bears its share of the burden.
You'd do well to remember that lesson. Here's your reward."

I'm looking for a challenge.
Participation in the games alone will bring you honor, but to stand alone above all in triumph is to bathe in glory. I challenge you to see your team to victory in three Battleground matches. Return to me when you succeed, and I'll see you rewarded.
I'll return when I've won three matches

The Rules of the Battlegrounds[edit]

When spoken to, you have the option of asking him to explain the rules of the Battlegrounds games:

Tell me about the Battleground games.

"Of course! Now, we have many games available. Which challenge would you like to know about?"
Tell me about Team Deathmatch.

"Team Deathmatch has always been popular. All that ceaseless bloodshed really gets the heart pumping! Just go into the field and attack as many players as possible. The more hits you get in, the more points your team scores."

Tell me about Domination.

"Anyone can claim a capture point, but it's a true test of skill to master Domination. Seize and protect as many capture points as you can. The team with the most territory in the end wins. In this game you must dominate your rivals, or be dominated!"

Tell me about Capture the Relic.

"Capture the Relic is one of our simpler games. You must seize your enemy's relic and return it to your base, all while protecting your own relic as well. Teamwork is the key to victory in this game, as you'll need a strong defense and offense."

"Chaosball sounds simple. You grab the ball and hold onto it for as long as you can. The longer you last, the more points you earn. It gets a bit more complicated when you're also running for your life, dodging swords and spells from the other team."

Tell me about Crazy King.

"Ah! One of my personal favorites. Unlike our other games where you must stand fast, Crazy Kind gets the blood really flowing. In this game the capture point keeps moving. Keep your feet quick and your shields up. Difficult to win when you're dead!"

Battlemaster Rivyn will send you letters of congratulations, for achieving various things during battleground matches.

As you compete in matches you will be sent rewards along with messages like this:

An alternative message, which may appear if your team does not come first.

If your character manages to find a spot on the leaderboards for any Battleground game type, Rivyn will send you the following:

This Elder Scrolls Online-related article is a stub. You can help by expanding it.
Retrieved from "https://en.uesp.net/w/index.php?title=Online:Battlemaster_Rivyn&oldid=2517916"
Categories:
Hidden categories: