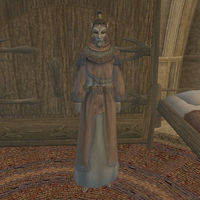 Salen Ravel is a Dunmer priest who serves at the Maar Gan Shrine. There he sells books (just religious texts), ingredients, potions, spells, and spellmaking services to all who need them. Salen is a restocking vendor of the following ingredients: Dreugh Wax, Ectoplasm, Gravedust, Kagouti Hide, and Shalk Resin. Additionally, he owns the Black Anther and Trama Root plants which grow around the shrine, so he may restock on those, though only after the plants have had a chance to grow back. He is also the owner of the Falasmaryon Propylon Index, which can be found as an offering on the altar. He will only sell it to you if you have the Master Index plugin installed. Otherwise, you'll have to find a way to steal it if you want it.

Salen has the following spells available for sale: