The UESPWiki – Your source for The Elder Scrolls since 1995
< Morrowind: People / Merchants / Spell Merchants
Jump to: navigation, search 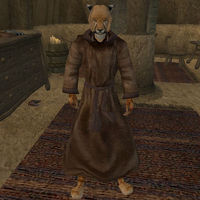 J'Rasha is a Khajiit healer who has a shop in the eastern canalworks of the Foreign Quarter in Vivec. There he sells ingredients, potions, and some unique spells to all who need them. J'Rasha is a restocking vendor of the following ingredients: Ash Yam, Chokeweed, Marshmerrow, Saltrice, Scamp Skin, Scuttle and Small Kwama Egg. He is not involved in any quests, but has a rumor mentioning tribal uprisings in Black Marsh.

Being a Khajiit, J'Rasha is one of several merchants who will buy moon sugar and skooma.

J'Rasha has the following spells available for sale: