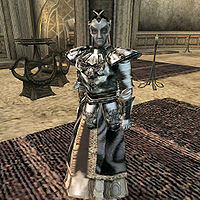 Garisa Llethri is a Dunmer warrior and a councilman for House Redoran who can be found in the private quarters in his manor in Ald'ruhn. He has interests in the Caldera Mine, and believes that there is corruption going on with House Hlaalu's control of the mine, which he will ask you to investigate. You'll also need to earn his support in order to be named the Redoran Hortator. There is a rumor going on that his wife is having an affair with the Archmaster of the House Redoran and that Garisa isn't able to do anything about it. He also has a son with some nocturnal aspirations.

Garisa wears a steel cuirass with matching greaves, pauldrons, and gauntlets and an extravagant skirt with matching belt and shoes. He also carries a dwarven claymore and 13 gold. Aside from his natural resistance to fire and the sanctuary provided by his ancestors, he knows no spells.