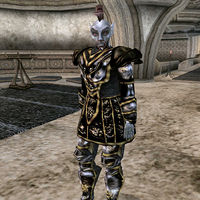 Bolvyn Venim is a Dunmer crusader, and currently the Archmaster of House Redoran. He can be found in Venim Manor in Ald'ruhn with his wife Dilvene Venim. Somewhat of a natural leader, he is credited for securing House Redoran's landholdings during the opening of Vvardenfell and the successful move of the Council to Ald'ruhn. Venim is very suspicious of outlanders and will not support your bids to become either Hortator or Archmaster of the House. You will be forced to kill him in either case. According to rumors, he was having an affair with the wife of one of the other Councilors.

He is wearing a near-complete set of ebony armor including the cuirass, both pauldrons, both bracers, greaves, and boots. He is also wearing an exquisite shirt with matching belt, pants, shoes, and ring. He is wielding a daedric dai-katana and carries the key to his manor. Aside from his natural resistance to fire and the sanctuary provided by his ancestors, he knows no spells.

"Unless you have some important business to discuss, outlander, I suggest that you leave."
"I have not changed my mind about you, outlander."

"I would never support such a law."

"No, this law is undeniably fair. Your Telvanni lies do not sway me."

"A Hortator is a war leader and champion chosen by a Great House council. Why?"

Ask how a Hortator is chosen.: "Only the Redoran councilors can choose a Hortator for House Redoran, and it must be unanimous. The duties are defined by ancient custom, but, in essence, a Hortator is a House champion, and must be both skilled in combat and known for his courage and honor."
Tell your story and ask to be confirmed as Hortator.:

"You are an [sic] fool. An ignorant, ill-mannered, outlander fool. I'd rather make a monkey Hortator. As long as I am head of this House, you will never be Hortator." Goodbye. (Disposition down by 10)
(Disposition at least 75) "Are you trying to manipulate me? Do you take me for a fool? Do you think I can be so easily won over? You are a fraud. Cunning, for an outlander, but a complete fraud. No, you will never be Hortator. I will not permit it." (Disposition down by 25)

"You have played your tricks with the other Councilors, but they will not work on me. This has gone far enough. If you are not a coward, as well as a fraud, I will put a stop to your ambitions at the Arena in Vivec. I will meet you there if you dare face me in a duel to the death."

"Even if you get the councilors on your side, I will veto them. I would rather die than see House Redoran dishonored by an outlander."

"There is no need to name a Hortator, and if there were such a need, I would not shame House Redoran by naming an outlander our Hortator."

If you manage to speak to him during the duel:

"You must be a coward to even imagine such a thing. Knights and gentlemen do not yield to animals. I despise you. Go ahead. Kill me, if you can. And I shall curse you with my dying breath."

"You will never be the Archmaster of House Redoran. Meet me at the Arena in Vivec where I shall prove my right to rule in a duel to the death." Goodbye.
"We fight to the death, %PCName." Goodbye.

"What are you doing with that? That belongs with the collected taxes. Either give it to me or face justice."

Here, take it.: "Good. Now leave and do not speak with me of this again."
The Bal Molagmer will return it to its owner.: "You are nothing but a common thief. I will prove your guilt upon your body." Goodbye. (Disposition down by 50)

If you give the locket to him above, but then steal it back in some way:

"I don't know how you got the locket back, but you won't make a fool of me!" Goodbye. (Disposition down by 50)