The UESPWiki – Your source for The Elder Scrolls since 1995
< Morrowind: Quests: Main Quest / Vivec City
Jump to: navigation, search

You have just officially become the Nerevarine and must be acknowledged as the war leader by the four Ashlander tribes (Ahemmusa, Zainab, Urshilaku, and Erabenimsun) and the three Great Houses (Hlaalu, Redoran, and Telvanni).

The first step is to become Hortator to the three Great Houses and complete the Fourth Trial, starting with House Redoran (though the actual order of the houses is unimportant). The quest has two different paths, one for members of House Redoran, and one for those who are not.

Pay a visit to Athyn Sarethi in the Sarethi Manor in Ald'ruhn (Manor District). If you are a member of House Redoran (but not the Archmaster), Athyn should tell you that all but one council member will support you as Hortator, Bolvyn Venim. If you are the Archmaster, Athyn will make you Hortator immediately. If you're not a member, you'll have to persuade him significantly in order to get him to speak with you. Even then, Athyn will ask you a favor first: to rescue his son Varvur Sarethi from the Venim Manor (first manor on the right in the Manor District). You must be careful when rescuing him not to kill the councilman Bolvyn as the other council members will turn against you.

To find Varvur, find the Right Wing of the Venim Manor. In the large room, on a bench, you should find a 'Note to Malsa Ules' and a key. The note says that "a guest" is being held in a hidden room behind the tapestry. You'll find the door and tapestry nearby, and the key on the note opens that door (50 level lock). Remember the nearby guards won't like it if you take the key or note. Once you find Varvur, escort him back to the Sarethi manor and his father. Note that any guards that see him will attack, so planning the fastest route ahead of time might help. You are free to kill the guards, but again be careful not to kill Bolvyn. Once you return Athyn's son, he will give you his vote to be named Redoran Hortator and says that the other council members will concur, except for one.

From this point, the quest is the same whether you are a House Redoran member or not. Talk to all the councilors in Ald'ruhn in their respective manors: Miner Arobar, Garisa Llethri, Hlaren Ramoran, and Brara Morvayn (see the Red Book of 3E 426, provided by Athyn, for a complete list). Talk to each councilor about the Redoran Hortator and to get their vote. If you are following the Red Book of 3E 426, you will likely visit Morvayn Manor in east Ald'ruhn looking for Remas Morvayn. Unfortunately, he was killed defending the Morvayn Manor from Corprus monsters. His wife Brara Morvayn has taken his seat on the Redoran Council, and you will have to visit her to get the Redoran vote. She can be found in Morvayn Quarters, which can be accessed from the Redoran Council Hall (the door to Morvayn Quarters doesn't appear on the map, since it is directly under the door to Galsa Gindu's House). 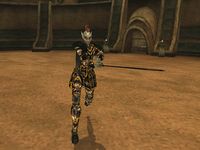 You will need to duel Bolvyn Venim to the death

The one exception is, of course, Bolvyn Venim, who won't agree with you no matter what. The only option is to have a duel to the death with him to get him out of the way. If you just kill him outright, the other council members will turn against you. Talking with him reveals he wishes to duel you in the Vivec Arena, but he offers a fight only after you have the vote of all the other councilors. If you don't have the votes, his disposition drops by ten points (25 if it was 75+). Take a Guild Guide or Silt Strider over to Vivec, and enter the Arena to find Bolvyn. He is a tough opponent if you attack him in melee as he is heavily armored (ebony) and has a Daedric Dai-katana. He has no ranged weapons or spells however, so feel free to take him out from a distance, but only when standing on the ground floor or within Venim's reach, as spells have been reported to go through his body from the second floor of the Arena. Healing potions and scrolls are helpful of course.

Once Bolvyn is out of the way, return to Athyn Sarethi to be named the Redoran Hortator and receive the Ring of the Hortator to identify yourself as such. You also receive a note from the Archcanon saying that should you be named Nerevarine and Hortator of the four tribes and three houses, to present yourself to the Archcanon Saryoni in the High Fane of Vivec. Hold onto this note as you'll need it later.