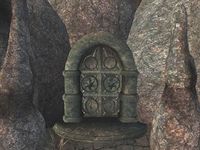 Entrance to Cavern of the Incarnate

Cavern of the Incarnate is a holy place dedicated to Azura in the northern Ashlands.

Statue of Azura inside the Cavern

The cavern is the resting place of previous failed Incarnates (Nerevarines), and the location of a statue of Azura and the Moon-and-Star, an artifact necessary to the Main Quest line. It is located in the Valley of the Wind, a J-shaped foyada in the northeast section of the Ashlands.

As a holy place dedicated to the Princess of Dawn and Dusk, the cavern can only be entered when Azura's Star is visible (dawn and dusk).

All of the following NPCs are ghosts with 65535 health, making it nearly impossible to kill any of them.