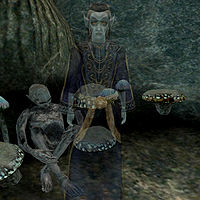 The Ghost of Ane Teria

Ane Teria was a former crusader for the Tribunal Temple who later contributed to the Apographa. She was one of the failed Incarnates in the Cavern of the Incarnate. She gave the Nerevarine her mace and 36 Lessons of Vivec, Sermon 12.