The UESPWiki – Your source for The Elder Scrolls since 1995
< Morrowind: Quests: Daedric Quests / Bitter Coast
Jump to: navigation, search 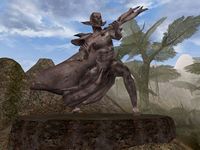 One of the Daedra, Boethiah, has a shrine that's more than a bit tricky to find. Why? Because it sank to the ocean floor. M'Aiq the Liar will tell you about this place if you meet him on his island in the Sheogorad region.

Northwest of Hla Oad, on an island, there's a Daedric ruin called Ashurnibibi. If you check out the ocean a short distance west-northwest of the island, you'll find ruined Daedric buildings on the ocean's floor. Among them is the shattered Shrine of Boethiah. You can activate Boethiah's head, located a short distance from the rest of the statue, and initiate the quest.

Activate the crumbled statue and Boethiah will speak to you:

"What do you want with me, mortal? My shrine is in ruins, my priests have forgotten me. Will you rebuild my shrine, mortal? Restore it in all its glory? Accomplish this, and I will reward you. You will be the bearer of Goldbrand, my sword of legend. There is one who can help you do this for me. Listen.... Rough hands to smooth stone, Carving rock instead of bone, In Caldera an artist waits, His masterpiece to create. Find the one who may shape the rock. Go."

He wants his shrine rebuilt, and sends you to Caldera to find a sculptor. Ask around and you'll be directed to a shopkeeper named Verick Gemain, who in turn directs you to an Orc in Ghorak Manor across the street from his shop. The Orc, Duma gro-Lag, is on the third floor of the manor and requires 2000 gold and a copy of a book on the shrine (Boethiah's Glory, available in Jobasha's Rare Books in Vivec) to begin work. He tells you that it will take him several weeks to complete. After 21 days the shrine will be finished, although you get no journal entry saying it is done.

At that time, head to the rebuilt shrine—located at Khartag Point—and activate the statue. A word of caution, though: the statue has to be totally built in order for you to activate it, so venturing two days after the sculptor gets there will be pointless. The Daedric Prince will speak to you:

"You have done well. This shrine is a worthy one, and my power will again be felt. Take this, mortal. Wield the Goldbrand with a strong hand, and let all know that my Shrine has risen!"

You will be rewarded with Goldbrand, a one-handed longsword with impressive base damage and good fire damage.