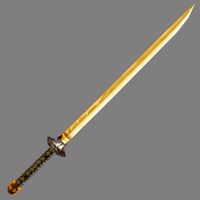 Eltonbrand is a one-handed longsword obtainable by upgrading Goldbrand. Its statistics are better than those of Goldbrand's, with a higher possible damage output, more enchantments, and more uses of those enchantments.

You must have Shashev's key (required for a vampire quest), Goldbrand, and exactly 11171 gold on you when you talk to Sirilonwe. The script will run, and you should see the message "Go to Hell, Carolina!". You will now have Eltonbrand in your inventory rather than Goldbrand.