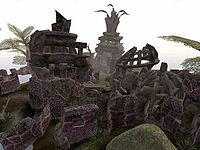 Ashurnibibi is a shrine to Malacath on a small peninsula northwest of Hla Oad. The ruin has been taken over by Orc kidnappers. You'll have to travel here to rescue Joncis Dalomax in an Imperial Legion quest for Imsin the Dreamer in Buckmoth Legion Fort. The shrine also contains a few skill-improving books. There's also a quest available from the Daedra Prince Boethiah nearby, but you'll have to dive deep underwater to find him (west and a little north of Ashurnibibi - not in the underwater passages inside Ashurnibibi). There are lots of critters in the water, and they seem just to keep coming. Unless you are an Argonian, you may want to water-walk. Look for the shattered statue, unless you want to explore the sunken ruin. 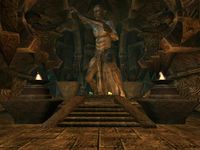 At the entrance inside, there's coupl campfires. After fires, there is short portion of swimming required. Right before entering shrine area, there's small stone chest, which contains Ancient, rusted Daedric Key along with Sneak skllbook 36 Lessons of Vivec, Sermon 26, leveled probe and standard potions of water breathing and levitaion.

On the altar you can find a ruby, a piece of raw ebony, an emerald, and a cursed Daedra's heart. Left side of altar is guarded by Rolfish whereas right side by Durgash. On Durgash' side there are few scrolls, potions, and skillbooks for Destruction (The Horror of Castle Xyr) and Alchemy (Game at Dinner). There's also urn containing scrolls next to stone table. 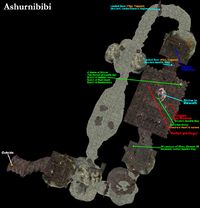