Old Hroldan[nb 1] (formerly known as Hroldan)[1] is a historical landmark in the southern river valley of the Reach, in the province of Skyrim. The land has frequently passed hands between the Reachfolk and the Nords of Karth. To the Nords, it is a historical settlement from the early First Era, possibly one of their earliest known footholds in the Reach in a post-Dragon Cult era,[2] but to the local Reachfolk, the site was known as Hroldan Ring, and it was neutral grounds for the Reach tribes to trade resources or share stories with one another.[3] The site is known as Ahroldan in the Dragon language.[2] 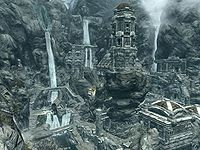 It is unknown who first settled in the area, but the name dates back to the early First Era, when that portion of the southern Karth River valley was part of Whiterun Hold, at the time under Jarl Gjalund.[2][4] It was at this point, it was simply known as H'roldan, and it was a large spacious wooden hall with open land for pasturing. It was reportedly taken from the Reachfolk, and they would give silver and iron as tribute.[2] Many years later, Hroldan was the seat of an unknown Jarl, alongside the city of Markarth. In 1E 2801, Emperor Kastav of the Second Empire ordered the Dragonguard to seize hostages from both settlements, so their jarls can meet his conscripted quota. The incident damaged public relations between the Dragonguard and the people of Skyrim.[1]

By the time the Interregnum took place, Old Hroldan was relinquished back to the Reachfolk and it was reverted to the site known as the Hroldan Ring. The meeting ground was featured in the fictional book, Investigator Vale in the Reach. The eponymous main character met with Clan Chieftain Orana of the Spirit-Tale Clan, who informed her about the missing offerings for the spirits of Hroldan Ring. Some of the tribes including the Spirit-Tale Clan were nigh close to war, but the investigator was able to find the culprits in mere seconds. Two young hunters and a harmless prank gone wrong. The investigator was then granted safe passage through the Reach.[5] 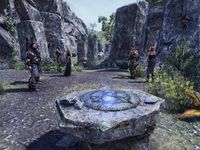 The Meeting of Two Clans at Hroldan Ring

In 2E 582, the Ghostsong Clan gathered at Hroldan Ring at the behest of their matriarch, Nathari, before they made their way south to the Lost Valley Redoubt. The matriarch promised the clan a great revelation inside the ruins, but it was later revealed to be a mass sacrifice to restore the Dark Heart that rests underneath the Reach.[6] In that same year, two rival clans, the Eagleseers and the Six-Fords gathered at Hroldan Ring to celebrate the arranged marriage of their youngest members, Eslyn of the Eagleseers and Madearn of the Six-Fords.[7]

Before the marriage had begun, the two ran out into the wilderness and the Chief-of-Chiefs, Cannear sent an adventurer to bring them back. Their quest eventually brought them across the Reach, on a journey to understand why the rivalry began in the first place, to maybe mend the broken connection the two clans had. The three of them returned to Hroldan Ring with the Lover's Coil, an artifact that symbolized the love between the two clan's founding members before it was broken. It is unknown whether they continued with the handfasting ceremony or not, but the feud between the Eagleseers and Six-Fords had eventually started to die out.[7] 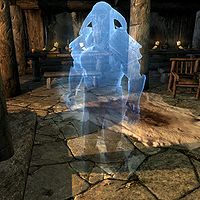 The Ghost of Old Hroldan

By the late Second Era, Old Hrol'dan was the site of an impervious stronghold still occupied by the Reachmen and it proved a formidable threat for the Nords of Southern Skyrim. One of the first known conflicts was the Sack of Old Hrol'dan, which took place sometime after 2E 809.[8] But one of the most important conflicts to come out of this time was the Battle of Old Hroldan, when the Colovian-King of Falkreath, Cuhlecain, who sought to unite the Colovian Estates for his campaign for the Imperial City. The King enlisted the help of his prized general, Hjalti Early-Beard to besiege the keep and secure their northern border.

The battle commenced and with his small band of Colovian troops and Nordic berserkers, General Hjalti broke the initial line until the enemy was forced back inside the gates. The next morning, the General approached the gates and penetrated the walls with ease and the power of his thu'um. The enemy's volley of arrows did nothing to sedate him and soon, Old Hrol'dan's walls had completely fallen and Hjalti's soldiers stormed in, securing the keep. The general acquired the name of Hjalti Talos and later took on the Cyrodilic name, Tiber Septim.[9]

By the third century of the Fourth Era, the only piece of property on Old Hroldan was a lowly inn owned by the publican, Eydis, and her husband. Throughout the years, she has managed to preserve Tiber Septim's bed and it has since been used.[10] One day, a certain traveler stayed in the inn for a night and woke up to find a ghost sitting idly in the inn. The ghost mistook the traveler for Hjalti and asked that he may be named his sworn brother, just as he promised him. The traveler left the inn to search for Hjalti's long-lost sword, somewhere in the expanse of the Reach. Eventually, they returned to Old Hroldan Inn and passed the sword onto the fallen soldier. Before he was able to rest in peace, the ghost taught the traveler techniques he and Hjalti learned from the swordmasters of Alcaire.[11]