This article is about the NPC in the original game. For the NPC added by Dragonborn, see Eydis (Dragonborn). 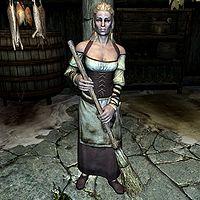 Eydis at the Old Hroldan Inn

Eydis is the owner and publican of the Old Hroldan Inn. She works there with her son Skuli and Leontius Salvius. Skuli's father has gone missing and Eydis can be overheard lying to her son about his whereabouts. She will relate some of the inn's history—especially the story of the time Tiber Septim stayed there after leading the invasion of Old Hrol'dan. The room she rents is the very room that he slept in.

Eydis will spend all of her time tending to her inn, never sleeping or taking a break from her duties as publician.

She wears a set of clothes and a pair of shoes befitting a barkeeper. Eydis is armed with an iron dagger to defend herself from potential threats. Additionally, she carries a key to her home as well as a variety of common loot and gold.

The first time you approach Eydis she will greet you by presuming you will want to stay in Tiber Septim's old room: "You'll be looking to rent Tiber Septim's room I take it?" On subsequent encounters she may make mention to her inn's history by claiming: "Old Hroldan is the stone that the Empire's history is built on." She will also boast of her son's skill at running the family's business: "Don't underestimate my son, Skuli. He may look young, but he can handle any drunks we get." She will also reference Skuli's absent father, claiming he is fighting for whichever faction possesses The Reach: "Skuli's father is off fighting for the Empire/Stormcloaks. I'm sure he's just fine."

Asking Eydis about Tiber Septim's room will have her proudly tell the tale of Old Hroldan: "That's right. In the Second Era, Tiber Septim himself led the army that conquered Old Hroldan from the barbarians of the Reach. Septim would later found the Empire that united Tamriel, but his first known battle and victory was right here. And this inn has the very bed the great general slept in on his first night as Old Hroldan's liberator. As good as it was hundreds of years ago." Agreeing to rent the room with the necessary funds will have her respond: "Have a good rest. It's the big room with the double bed."

Sleeping in the rented bed will lead to you being awakened to the sound of Eydis screaming, leading to the beginning of her related quest. A ghost has appeared in the inn, terrifying the hostess. Approaching her will have her speculate on who the phantom was: "Do you think the ghost is one of... Tiber Septim's dead men?" Speaking to her will have her say: "Mara have mercy that gave me a fright." Asking her about her screaming will have her point out the apparition: "There's a... ghost. Just wandering around my inn like it owned the place." Asking her about the ghost will have her respond: "Yes. I've heard stories that Old Hroldan was haunted, but no ones [sic] seen a ghost here since the Great War. He's from the battle, I just know it. He's one of Tiber Septim's soldiers... back from the dead."

Speaking to the ghost will have it call you 'Hjalti' and tell you he is looking for Hjalti's Sword. Returning to Eydis and asking her about Hjalti will have her ponder who Hjalti was: "Hjalti? I've never heard of anyone named Hjalti. Tiber Septim had many names. Maybe that's one of them?" Asking her about the sword will have her point you towards its resting place: "A sword? I remember a legend that Tiber Septim had attacked one of the enemy camps before he came to Old Hroldan. It could be there. I'll mark it down on your map."

After returning to the inn with the sword, and delivering it to the spirit, the ghost will disappear. This will cause Eydis to have further remarks about its sudden departure: "All of a sudden, the ghost disappeared. What happened to it?" She will wonder if the shade will return: "Do you think that ghost is coming back? It seems to have vanished." She will also claim she was just adjusting to the ghost's presence before it left: "I was just getting used to that ghost being here, and poof, now he's gone." 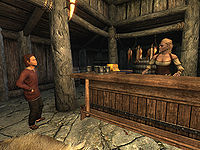 Eydis with her son, Skuli

Eydis will have a couple of conversations with her child, Skuli. One is about Skuli's missing father:

Skuli: "Mama, where did papa go?"
Eydis: "He's off fighting the war, dear. For the Stormcloaks."
Skuli: "Last time you said he was fighting for the Empire."
Eydis: "Yes. I'm sure he's doing well there."

They will also have a brief dialogue in which Eydis questions him about the current status of one of his chores:

Eydis: "Did you clean the linens, yet?
Skuli: "I did. Those mead stains are always tricky."

Skuli will also make mention of his mother, and how he will continue running the inn, if she dies: "My mother's dead, but I won't close the inn. I've hired Leontius to run things."

Leontius Salvius will make mention of his employer if you approach him: "I work for Eydis. She runs the inn." He will also direct you towards her or her son: "You should head on inside. Eydis or Skuli can take care of you." Should Eydis die, he will make mention of his additional responsibilities due to her passing: "Skuli owns the inn with his mother gone, but I handle the rooms."