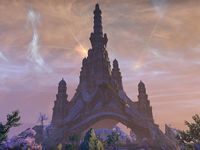 The Ceporah Tower is an ancient structure on the Isle of Artaeum, an island originally in the Summerset Archipelago.[1] The Tower serves as the headquarters of the monastic Psijic Order, who call Artaeum home.[2] While parts of the Tower were constructed by the Psijics, its foundations are far older, having an entirely unique architecture, and was built by unknown ancient beings.[3] Directly beneath Ceporah Tower lies the Dreaming Cave, which houses a portal that can be used to travel to any realm of Oblivion;[4] it has been used for this purpose by many, including Sotha Sil—a member of the Dunmer Tribunal—who made a compact with many of the Daedric Princes in the late First Era.[5]

Ceporah Tower is used by the Psijics in many of their rituals,[1] and is known as the location beneath which Vanus Galerion confronted Mannimarco about the latter's increasing fascination with necromancy and soul-trapping.[6] It was this confrontation that led directly to the founding of the Mages Guild.

Many of the persistent enchantments in the Ceporah Tower can be modulated by Control Globes if one has the years of experience and delicate touch required.[7]