Speak to a noble, who says:

"If you are available for hire, I need someone reliable to carry out a certain, covert mission. It might be rather time-consuming, but I assure you that you will be suitably compensated. Are you interested?"

The noble goes on:

"Very good. I'm giving you an emerald for you to give my contact, (contact's name) of (town). (He/She) will be waiting in (building). This item needs to be there in (first time limit) days. That's very important. Once you've made it that far, (contact's name) will have further instructions. I am counting on your discretion, (player's first name), and you will be watched. Good luck and thank you."

"Really? Too busy, perhaps. That is a shame." 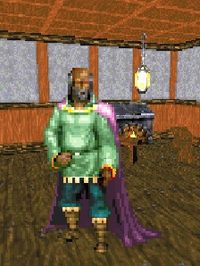 Travel to the town where the noble's contact is waiting. Be cautious, as you may be beset by thieves intent on getting their hands on the emerald. Should you get in a fight, the thief will say:

"The Thieves Guild has word that you are carrying a gemstone of considerable value. Hand it over and I'll let you off easy."

If you give in and surrender the emerald, the thief replies:

"Like taking coin from a child. Now, get out of my sight, you weak-kneed courier."

Without the emerald, you will not be able to successfully complete the quest. If you refuse, be prepared for a fight. Take care, as the thieves attacks may leave you poisoned or diseased. Dispatch any attackers and locate the contact's residence. Enter, and speak to the contact, who says:

"Ah good. The last carrier (quest giver's name) hired never found me and we had to hunt him down. Most unpleasant. Here's the (contraband). It goes to (recipient's name), this (recipient's description) in (recipient's town). You need to get it there in less than (second time limit) days. Good luck, (player's first name)." 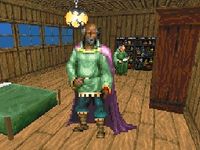 A merchant, and recipient of illicit goods

Travel to the town where the second contact resides. Locate the recipient's building, enter it, and deliver the item. The recipient says:

"Ah, good to see you (player's first name). And the (contraband) too. Excellent. And here is a (random gold) gold reward for your effort and, I might add, for your discretion. Your name will not be forgotten."