The UESPWiki – Your source for The Elder Scrolls since 1995
< Mod / Morrowind: Tamriel Rebuilt: Places: Cities & Towns
Jump to: navigation, search 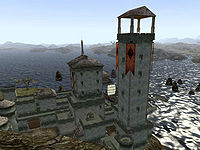 Firewatch is the seat of Imperial power in the Telvannis District. Moreover, it is a symbol of Imperial might and culture in this most remote corner of Tamriel. Firewatch is entirely fortified, and features a very tall lighthouse, an impressive palace, and a rich library. However, Firewatch is mostly a military zone, and the civilian part of the city is relatively small. The city itself is divided into three districts, each separated from the others by high walls and large gates that are closed at night. For more information, see the lore article.

The southwestern part of the city, the port district features large docks, a chapel of the Imperial Cult, and Census and Excise buildings. People who arrive, by boat or by Divine Intervention, in the Port District at night can head to the Silver Serpent, a boat converted into an inn, to rest until the morning.

The eastern part of the city holds a little town, where various merchants and the library can be found. The Town District is where Firewatch opens herself to the mainland, with the Southern and the Northern Gates.

Although Firewatch's fortifications are impressive, if it were to fall to attackers, the Hill Bastion is where the defenders would retreat for their last stand. Outside of Levitation magic, the only way in is either by climbing steep cliff walls or going through the city walls. Both doorways are easily defended by archers from the Bastion.

Duchess Perulia Jandacia holds seat in the massive tower of the Firewatch Palace. The local garrison is led by Herdonia Varan and the bastion soldiers are under Timeo Callonus' command; both report to Imperial Knight Senillos Tulnus. Champion Darnell oversees the formation of new Imperial Legion recruits. Within the Palace, Walks-Through-Shadow heads the local Argonian Mission, Galan Brandt and Gindaman are the stewards for the Guilds of Fighters and Mages respectively. Ladia Tunifus is the senior cleric at the Imperial Chapel, and should not be confused with her relative Vaselius Tunifus, the prison warden. Jeande Beluel does the Census and Excise paperwork. In the Town district, the local boss of the Thieves Guild, Silniel the Maven, can be found in the Howling Noose tavern.

From Vvardenfell, the quickest way to the city is to use a Divine Intervention spell or scroll while around Tel Mora. Shipmasters offer travel lines with Bal Oyra, Helnim and Tel Ouada. A road leads east, then north, to the Boethian Mountains, where it forks northwards to Bal Oyra and southeastwards to Ranyon-ruhn and Llothanis through a canyon. If one travels along the sandy hills on the coast south of Firewatch, a small trail leading to Tel Oren can be found. The northern gate leads to untamed wilderness. Effe-Tai in Mournhold can transport you to Firewatch palace.

Places of Interest Around Firewatch[edit]