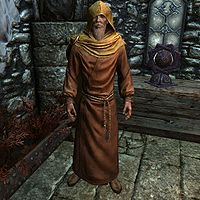 Styrr is an elderly priest of Arkay at the Solitude Hall of the Dead.

He wears hooded monk robes and a pair of boots. He wields an iron dagger and carries a belted tunic and some common gold and loot.

Styrr's scheldule is strange, because he is one of the few non-vampire characters who is nocturnal. He wakes up at 8pm, and wanders around the Hall of the Dead. After hanging out in the Hall all night, he stays up a little longer until he goes to bed at noon.

When greeted, he'll say, "Hello, my child. Arkay watch over you." and "May Arkay bless you with a long life, a proud death, and a restful grave." If you ask him how long has he tended the Hall of the Dead, he'll say, "All my life. I practically grew up in the Hall. My father and mother were the priest and priestess of Arkay before me, you see. I believe I was put here to protect this place from the darkness that pervades Solitude." You can now ask him what darkness pervades Solitude, to which he'll say, "This city has a long history of madness and murder. The Wolf Queen... Pelagius... The death of High King Torygg... And now, public executions. My books tell the stories. Have no doubt - as pretty as its streets are, as jovial as the bards may be... darkness is drawn to Solitude." If you ask him if the man who was executed is buried in the Hall, he'll say, "You mean Roggvir. Yes. I made an appeal to Captain Aldis. He allowed Roggvir to have a proper Nord burial, as is the custom in Solitude." When exiting conversation, he'll say, "May Arkay bless you with a long life." and "May the light of truth keep the darkness at bay."

After you deal with Potema and return to him, he'll say, "You've returned! I'm hoping successfully." When you tell him you have Potema's remains, he'll say, "Excellent! These things do have a way of working out when people take action. I'll sanctify the remains. In case Falk doesn't make it clear - Solitude owes you a debt of gratitude."