Skyrim:Hall of the Dead (Solitude) 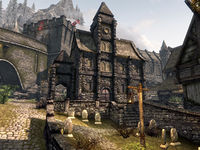 The Solitude Hall of the Dead

The Hall of the Dead is where Solitude's dead are brought to be prepared for burial.

The interior of Solitude's Hall of the Dead

Solitude's Hall of the Dead is tended by Styrr, a priest of Arkay. There is a shrine of Arkay in front room, which will grant you the Blessing of Arkay for eight hours. The dead themselves are buried in Solitude Catacombs, which can be accessed through the door in the basement.

Upon entering you are in a small room with a small pillar, opposite is an unlocked door. In the right half of the room is a firepit with a stone wall around it. In the eastern corner there is a wooden bench and narrow table against the walls with a low table in front of them. On the tables are; a plate of bread and cheese, a goblet, a common book, an iron dagger and a bunch of tundra cotton in a bowl. In the northern corner there is a small unit with an iron warhammer and the shrine to Arkay.

Around the central pillar there are several skulls, including one troll skull on a table. The left half of the room is dominated by a table and chairs in the center. The table is set for two, plates containing a seared slaughterfish and two salmon steaks, as well as two goblets, a potion of regeneration, bread and cheese. Beside the table is an open crate containing a sample of fly amanita, a gourd and an orange dartwing. Against the southeast wall is a set of shelves holding several random weapons, including two bows, a greatsword, two battleaxes and a war axe. To the right of this against the southwest wall is a random shield on a unit. In the western corner there is a barrel of foodstuffs and a set of shelves against the northwest wall holding a potion of regeneration, a potion of resist fire, two potions of minor healing and one of minor magicka, several wheels of cheese, a cabbage and six potatoes. To the left of the internal door is a small set of shelves holding an iron sword and mace and three iron arrows.

Through the door, on your right is a small wardrobe containing clothes, with a wall shelf above with a deathbell flower and common book on it. In the eastern corner is a round table with a goblet on top. Opposite the door, against the northwest wall is a narrow table holding a bowl of bread, a plate of sliced eidar cheese, an iron dagger and a sack underneath. To the southwest are flights of stairs leading up and down. At the bottom of the stairs there are a pile of sacks containing foodstuffs and a corridor flanked by rows of lit braziers leading to a closed door that gives access to Solitude's catacombs.

Climbing the stairs to the top floor, you come to a landing with a snowberry bush in a planter at the top of the stairs, a wardrobe containing clothes against the northwest wall with a horker tusk on top. Opposite the top of the stairs on the northeast wall is the door to Styrr's bedroom. Against the southeast wall is a large round wooden table holding three common books, a salt pile, a cup and a solution of strength. Next to this against the northeast wall is another narrow table holding bread and cheese in a bowl and on a plate respectively and a sack underneath. Above the narrow table is a wall shelf holding a bottle of alto wine and two bottles of Nord mead.

Styrr's bedroom consists of a double owned bed in the northern corner and an open crate at the foot containing a potion of regeneration and draught of strength. To the right against the northeast wall is a tall wardrobe containing clothes. There is an unlocked chest behind the door in the western corner to the left of a cupboard. Against the southwest wall there is a long unlocked chest, with a wall shelf above it holding a potion of plentiful healing and a bunch of lavender. Against the southeast wall is a set of shelves with two slaughterfish scales, two bottles of frostbite venom, a potion of haggling, a bowl of glow dust, a bowl of void salts and a basket containing two bunches of lavender. To the left of the unit is a pair of iron boots, with a couple of sacks to the left of these. In the eastern corner in front of another cupboard is a low table and chair. On the table is a plate of bread and cheese, a bottle of wine and a goblet.