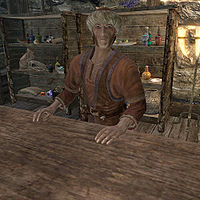 Quintus Navale is an Imperial sorcerer and the assistant of the alchemist Nurelion. He lives in The White Phial store.

Quintus wears a set of merchant clothes along with a hat and a pair of boots. He wields an iron dagger and carries his key to the store along with a selection of common items and gold.

Quintus becomes a potential marriage partner if you have completed Repairing the Phial.

Quintus seems to admire his mentor from saying, "My master can be a bit short-tempered, but I've learned so much from him." and "I'll never have Master Nurelion's skill with potions." If you ask him why he works for Nurelion, he'll be surprised: "Are you kidding? I came all the way from Cyrodiil just to work with him. He's... he's not the best teacher. But just watching him, I've learned so much."

Quintus is also involved in a quest where Sondas Drenim asks you to deliver his note to Quintus asking for medicine. When Quintus receives it, he will say, "Oh dear. Darkwater Crossing needs medicines for its miners? I'll see about getting this order filled right away. Here, a few Septims for you."

This Skyrim-related article is a stub. You can help by expanding it.
Retrieved from "https://en.uesp.net/w/index.php?title=Skyrim:Quintus_Navale&oldid=2087608"
Categories:
Hidden categories: