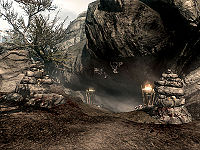 Movarth's Lair is a small cave north of Morthal inhabited by vampires. The cave features an exterior zone and one interior zone, with the interior separated into a number of rooms.

The vampires in this cave are conspiring, under Movarth Piquine's leadership, to enslave Morthal. There are also a number of unnamed corpses being buried in one of the outer rooms.

A twisting path runs all the way from the north side of Morthal to the cave.

There are two bleeding crown plants near the entrance, one of which can only be picked by carefully approaching the lit brazier to the right, as moving too close to the entrance will trigger entry. There is a skull on the stones to the left. 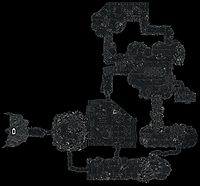 The entry tunnel leads to a wooden platform over a room with two frostbite spiders. There is a ramp to the left that descends into the chamber. There is nothing else of interest in this first room, except the dark tunnel to the south which leads to another room, where a vampire's thrall is sitting at a table with a lantern. Beyond the thrall, along a short twisting path, is a small room with three carts filled with the remains of a few people, and an imp stool growing in the middle of the room. There is a hole in the rock wall to the left, but it is too high to reach.

The path deeper into the network of caverns is to the north of where the vampire's thrall sat. Another vampire's thrall is working in this room, burying corpses in a hole in the northwest portion of the room. There are three piles of rocks around the room littered with remains. There is a table to the left of the entrance with some generic clothes, another to the right with more generic clothes, and a bleeding crown growing at the base of the second table. By the western wall is a cart and a table with more clothes. By this table is a pickaxe, a barrel with a potion of minor magicka, and beyond that a bleeding crown. The corpses of three Nords and a Redguard lie in the hole, and the only thing of note is that the Redguard carries a lockpick. Lastly, on the other side of the room, there is a bed roll and another bleeding crown.

The next tunnel is to the north, and splits into a higher and lower pathway. The higher path is bridged with wooden planks, and there is an iron ore vein in the wall. This path leads around the wall to a bedroom of sorts. The lower path leads to the main chamber, where the master vampire and one of his followers are feasting. If stage 100 of the related quest has been reached, the former will be Movarth Piquine; otherwise, it will be a generic vampire boss. There are three other branches from the main chamber: one to the northeast (where you can find the second iron ore vein), one to the east, and one to the south. There is a vampire in the tunnel to the south, and another in the tunnel to the northeast, who will detect any hostilities in the main room and rush to their master's aid.

There isn't much in the main room. The table is covered with food and drink, with a medium coin purse, two small coin purses, and a fair bit of loose gold. The table also holds an enchanter's potion, as well as remnains of the vampires' victims, clothes, armor, bones, etc. Lastly, there are two Namira's rot growing between the table and the southern tunnel.

The tunnel to the northeast leads to the other side of the bedroom area that the higher wooden path lead to. There are two imp stools growing in the northeast tunnel. The room is split in two: one part with a single bed, and another section with three bed rolls. By the single bed is a copy of the Illusion skill book 2920, Sun's Dawn, v2, Movarth's boots (which provide a 15% sneaking bonus), and a shelf with a large assortment of boots (which includes a pair of Imperial light boots and a pair of Stormcloak officer boots). The only item of note by the bed rolls is a potion of minor healing on a dresser.

Behind Movarth's throne to the east in the main chamber is a wooden ramp to a small room with another vampire. There is a chest and an alchemy lab here, along with a set of shelves holding a potion of healing and a copy of Immortal Blood, a book about Movarth.

The tunnel to the south leads to one final room. There is a vampire on the platform to the left. To the right is a wooden platform with a bed roll, a chest, and a leveled poison on a dresser. At the top of the stone ramp is another imp stool, with a large coin purse, a bow, and a few leveled arrows on the cobweb-covered table to the left. A tunnel to the right leads to the opening above the small room with the three carts filled with remains, providing a convenient return to the entrance.