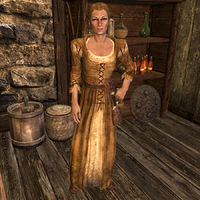 Elda Early-Dawn is the Nord proprietor of Candlehearth Hall in Windhelm. She will rent out a room to you for 10 gold a night and offers merchant services. If anything happens to Elda, Nils takes over running Candlehearth Hall.

She spends her entire life behind the counter, selling food and drink to the regulars. She only makes an exception if you rent a bed for the night and will then escort you to your room. She wears a belted tunic with a pair of boots. She wields an iron dagger and carries a selection of common loot and gold.

When you approach her, she will welcome you to Candlehearth Hall: "This here's Candlehearth Hall. Great room's upstairs, an' there's a bed for rent on the ground floor." However, if you are a Dunmer she will instead mock you: "Another Dark Elf. Just what Windhelm needs" or "Maybe you should just move along."

Her other greetings are more polite, for all races: "Got some fresh-baked bread an' good cheese, if you're after a bite to eat", "Mind you don't get fresh with Susanna. She plays the flirt, but it's just to get good tips." For non-Dunmer, she may also add: "Those Dark Elf refugees will take over the city if we aren't careful."

You can ask her about the name of the inn, and she'll ask with a condescending tone: "Did you see that candle above the fire upstairs? It was lit one hundred and sixty-three years ago, back when this building was the home of a grand warrior named Vundheim. When word came that he'd fallen, his son Deroct lit the candle in his honor. Nobody knows why it still burns."

Once she has escorted you to your room, she will add: "Enjoy your stay, and don't break nothin'!" or "Mind you don't put out that candle on the hearth upstairs!"

When asked for rumors, she may tell you about the Aretino boy in town: "Folk been hearing some strange stuff coming from the Aretino place. Chanting. Talk is, little Aventus is trying to contact the Dark Brotherhood..."

When asked about magic she will point you to the College of Winterhold with: "Magic? Goodness, not here! Nothing dangerous like that! That's all kept to that College up in Winterhold. Better that than dealing with Ulfric's wizard like some do."

If the civil war ends with the death of Ulfric Stormcloak, you can ask her if she misses him and she will confirm: "Aye, that I do. I ain't sayin' he was perfect, but he knew what it meant to be a Nord. The Empire's always taken us for granted. Nords died by the thousands in the Great War, and what did the Empire do? They outlawed the worship of Talos, Skyrim's most beloved son. There's thanks for you. I guess what I'm sayin' is, Ulfric stood up for us, an' for all Skyrim. So who's goin' to stand up for us now?"

Elda will randomly have brief snippets of conversation with the regulars at Candlehearth Hall, specifically Calixto Corrium, Captain Lonely-Gale, and Jora: 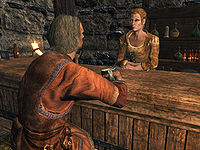 "Calixto, do you know if there's any truth to these rumors of dragons?" 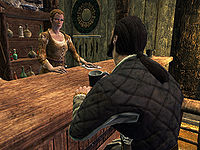 "Captain, have you heard these stories of dragons?"

Elda: "Calixto, do you know if there's any truth to these rumors of dragons?"
Calixto: "Eh. I try not to trouble myself with stories of the outside world. Now if someone brings me a dragon scale, that's a different story."
Elda: "But how would you know it's real?"
Calixto: "Ah, I can't reveal all my secrets to you. But rest assured, I would know."

Elda: "Calixto, someone left an interesting ring in here a few weeks ago. Would you like a look?"
Calixto: "Of course, my dear. It may prove to be quite the curiosity! One must always be alert."
Elda: "Well, I seem to have misplaced it at the moment. But it was white, like alabaster, with three bright rubies set in it."
Calixto: "Be very careful with that. It sounds as if it may be the Death Ring of Dro'farahn. A ring of the most dangerous sort."
Elda: "Oh dear. What should I do?"
Calixto: "Bring it to me straight away when you find it. Don't dally. I can keep it safe."
Elda: "Oh, thank the gods you're in Windhelm, Calixto!"
Calixto: "Think nothing of it."

Elda: "Captain, have you heard these stories of dragons?"
Lonely-Gale: "Elda, you know better than to believe every idiot traveler that wanders through."
Elda: "But they're saying that one of them freed Ulfric... that he's in league with them."
Lonely-Gale: "Think about how ridiculous that sounds. Come now."

Jora: "I just don't know what to do anymore. He's hardly ever in the temple. I see him at breakfast, and that's it."
Elda: "I know, dear. He's a busy man, though, and loyal to the Stormcloaks."
Jora: "What about being loyal to his wife?"
Elda: "I... I'm sorry, dear, I've got some other customers. I'll be back around in a minute."

Elda: "Oh, Jora. Good to see you. I was wondering if you might ask Lortheim something for me."
Jora: "Don't bother. I don't have much chance of seeing my husband these days. He's always up in the palace with Ulfric."
Elda: "Oh, I'm sorry to hear that. Is everything all right?"
Jora: "It's been better, I'll be honest with you."
Elda: "Here, let me get you some mead. This one's on me."

She also has a relationship with Brunwulf Free-Winter who tries his best to lure her away from Windhelm:

Brunwulf: "I've been thinking about building that cabin we talked about."
Elda: "Oh? Where?"
Brunwulf: "There's a clear spot just west of Riften. You know the area?"
Elda: "I've been there before, but I don't know it well."
Brunwulf: "Well that's where I want to build. In the fall forest. Give it an easterly view. The sunrise is almost as pretty as you are."
Elda: "That sounds lovely. You're very sweet."

Brunwulf: "How long have you run this place, again?"
Elda: "Nearly thirty years, now."
Brunwulf: "Just wondering when you'll be ready to give it up and settle down. Seems like you're always working."
Elda: "I just feel like if I'm not here, then something could go wrong. Nils is a hard worker, but I wouldn't trust him to run things."
Brunwulf: "One of these days he'll have to learn."

Elda: "Tell me about the Great War. I hear you were in the battle of..."
Brunwulf: "Elda, honey, let's not talk about the war. It's in the past."
Elda: "I'm sorry. What would you like to talk about?"
Brunwulf: "Hows [sic] about we figure out some way to keep warm tonight?"
Elda: "Oh! You behave, now!"