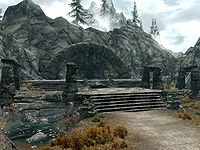 The barrow is related to the first quest of the Bards College. The ghost of the bard Svaknir is in the first room, and will lead you into the dungeon. 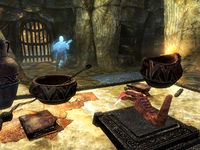 Svaknir and the ruby claw

In the first room, you will encounter the eager ghost of Svaknir. He is standing near the Ruby Dragon Claw. After he beckons to you, he will disappear, but will return to guide you through the tombs. Taking the claw will awaken four of the draugr (which you can kill before you take the claw while they are still sleeping), as well as raise the gate directly across from the entrance. There are two small burial urns in the rubble in the southeast and northeast corners of the room, another in the northwest corner near an iron door, an urn to the left of the claw, and a medium coin purse in an alcove in the southwest corner. There are numerous dead draugr throughout the ruin that can be looted.

To the northwest is an iron door. The door opens into a small, seemingly empty room, holding only a random sword and a random potion of healing. This room will eventually serve as the way out. Head back out to the main area and proceed through the now open gate. Follow the passage, watching out for a pressure plate that triggers a spear trap just before the intersection. From here, turn left, heading north. As the passage descends, look for two empty random soul gems on a sideboard. Eventually, come to the end of the passage and a pull chain that activates several rotating doors in a row.

The next area is more of the catacombs. As you move through, you pass more rotating doors on either side and begin to notice a proliferation of spider webs. At the end, turn west and confront two frostbite spiders, then continue forward passing an alcove on the right containing a random warhammer. At the end is an urn, and behind some webbing an apprentice-locked chest. Return to the previous room, where some thick webbing is to the south. Chop or burn your way through to enter a room ending in another pull chain. Again, this will activate several rotating doors in a row. As the doors open, two draugr will be waiting just ahead. Past the draugr is a battering ram trap triggered by a pressure plate. Bypass it to retrieve a copy of the Speech skill book The Buying Game, a medium coin purse, a random potion of magicka, and a random empty soul gem. 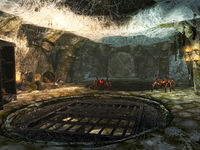 Spiders nesting in the room with the trapdoors

Head through the passage to the north, encountering one more draugr slumbering in an alcove in front. At the top of the following stairs is an urn and a burial urn in the northeast corner. At the bottom of the first set of stairs is a pressure plate that triggers a flamethrower trap. Bypass this and face a doorway covered with light webbing. Here, two frostbite spiders will drop from overhead. There are two bookcases with a random potion of magicka and a random empty soul gem on the shelves. To the right of the bookcases is a pair of random boots. At the rear of the room is a sideboard in the northwestern corner with a pair of random gauntlets on top, and a random greatsword and another pair of random boots to the right. Opposite in the northeastern corner is another sideboard with an urn and a leather strip on top. There are also two lootable draugr cocooned in webbing on the north and east walls, and one lying on the floor by the sideboard in the northeastern corner. A further draugr corpse is lying beneath the first (shallow) floor grating, and can be looted with careful positioning.

To proceed, activate the pull chain on the wall to open the trap door in the floor to reveal a well. Drop into the well to continue. There is nothing of interest at the bottom of the well, and the way forward is to the east. Emerge from the water into a partially flooded passage and then into a larger cavern. A skeever is nosing about in the shallows, and a draugr is standing on a ledge, straight ahead overlooking the room, beside a soul gem. Another draugr will emerge from the sarcophagus below the ledge, and more will ambush you from the left. Collect a small coin purse and four loose gold coins from under the bottom of the wooden spiral ramp winding around the pillar to the right, then ascend the ramp. An adept-level trapped iron gate bars the way across a stone bridge. Opening the gate without disarming the trigger in the bottom right-hand corner will set off four sets of swinging blade traps along the bridge. If you have to cross the bridge with the trap activated, a chain will turn it off on the far side, allowing any follower you have to pass safely. 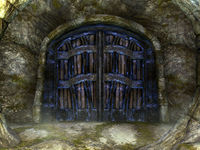 Follow the next wooden ramp up and pass through a set of iron doors at the top. In an alcove to the right in the following corridor after passing an urn along the wall is an arcane enchanter built into a table, with a random helmet to the left. A random potion of healing is on a sideboard to the left. Opposite the enchanter, to the west, along a short corridor is a magically sealed door and a sideboard with a stone bowl containing three canis roots. A passage to the right heads down some steps. Here you will find more leveled draugr to deal with. At the intersection, first go to the left, passing a burial urn on a shelf to the left. A pressure plate that triggers a spellcaster trap which shoots Frostbite spells is in the doorway. It is easily avoided, but if you do activate the trap, remove the soul gem to the right to deactivate it. Another random empty soul gem is sitting in the same alcove, but may fall to the floor if you activate the trap. A dead draugr is on the floor, along with a random potion of stamina and a random greatsword. A scroll of Circle of Protection is just inside the doorway on a plinth. Backtrack to the other side of the junction, heading north, to find an expert-locked door, behind which is a master-locked chest with random loot.

After picking up your goodies, proceed down the stairs on your left. As you enter the circular room, the iron portcullis closes behind you, and the other gates in the room will open, expelling up to five leveled draugr. If you are sneaking, and provided your Sneak skill is high enough, it is possible to avoid facing the draugr all at once. The first gate on the south wall, where two of the draugr came from, has an unlocked chest with an apprentice-locked trap that triggers a poison dart trap. It is easy enough to avoid the spray of darts from the ceiling by opening the chest and then jumping backwards quickly. The other two gateways in the room hold nothing of interest, although an urn is found in the northeast corner of the room. Activate the chain to open the trap door in the center of the room, and follow the wooden spiral stairs down. At the bottom, the handle will open a section of the wall revealing Svaknir's body and the quest item King Olaf's Verse in his hand. After you take the book, Svanknir's nearby ghost will disappear to go unseal the sealed doors. Make your way back up the spiral stairs to see Svaknir waiting for you. Follow, and he will now open the previously sealed doors which lead to a puzzle door. The puzzle requires the correct combination of symbols as well as the Ruby Dragon Claw, found in the first room, to operate. The claw reveals the correct order of the symbols: Wolf—Hawk—Wolf. 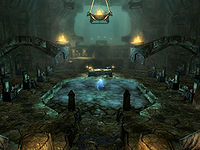 The crypt of King Olaf 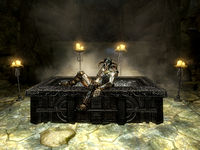 King Olaf rising from the grave

The next room contains the tomb of King Olaf, and a whole host of draugr arranged in chairs on either side of the room. Most of the seated draugr are alive, and upon waking, will swarm you. Simply entering the room and strolling about is enough to rouse them. If your Sneak and Archery skills are high enough, you can pick some of them off before entering the room. After killing all of the draugr, Svaknir will bid King Olaf to rise, and upon doing so, King Olaf will attack. Svaknir will assist you in the fight, and as he is immortal, he can finish off King Olaf if the King proves too tough an adversary. After the battle, make sure to loot King Olaf's body for the key to the treasure room. There is a leveled potion of healing and a random filled soul gem on the center embalming table; however, as these will most likely get strewn about in the melee, they might be found on the floor nearby.

A word wall for a part of the Whirlwind Sprint dragon shout is behind King Olaf's sarcophagus, in the back of the room. To the right of the wall is a medium coin purse in an alcove. King Olaf's key will open the master-locked door to the left, revealing an unlocked treasure chest, a random potion of strength, and a random two-handed weapon. Opposite the chest, in an unlit brazier, is a large coin purse. To the right of the chest is a lever which opens the wall, providing a shortcut back to the small room by the entrance to the barrow.