The UESPWiki – Your source for The Elder Scrolls since 1995
< Skyrim: Quests: Side Quests / Bards College
Jump to: navigation, search

The Burning of King Olaf[edit]

All over Skyrim, the Bards performing at the various inns and taverns will point you towards the Bards College in Solitude. When you enter the building, you will be greeted by Headmaster Viarmo; he will explain a bit about the college and will proceed to hand you a task as part of your application to join. He explains that the ancient college ritual The Burning of King Olaf has been canceled due to the recent assassination of High King Torygg. The grieving widow, the recently appointed Jarl of Solitude, Elisif the Fair reasons that burning a King in effigy is distasteful at this time and wants the festival shut down. The Festival itself is centuries old and is, according to Viarmo, held to celebrate Solitude and the heroic acts of the mythical King Olaf who apparently slew Numinex, a fearsome dragon who terrorized Skyrim during the First Era.

To ease the mind of Elisif and thus save the Festival, Viarmo wants to recite King Olaf's Verse, originally a part of the Poetic Edda, but lost for thousands of years. The Poetic Edda is a living history of Skyrim, written by each bard studying at the College and as such, a precious item. King Olaf's Verse was Svaknir's contribution to the Edda and dared to question the heroic acts of King Olaf, the very King to whom the Festival is held. Because of the Verse, King Olaf sentenced Svaknir to death and all copies of the Verse burned. The residing Dean of History, Giraud Gemane, suspects that the lost Verse can be found inside Dead Men's Respite, which he also believes to be the burial tomb for King Olaf himself. 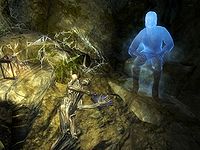 The ancient barrow is located in the mountains southwest of Morthal and you will, immediately upon entering, notice a strange ghost wave at you, then disappear through the sealed entrance to the north. Pick up the Ruby Dragon Claw from the table, which will cause four of the previously dead draugr enemies to reanimate and attack (you can kill them by sneak-attacking them before taking the claw), but will also raise the gate and allow you to follow the ghost. It soon becomes clear that the ghost shows you the correct path, so follow it and pull the chain at the dead end. The next area is a maze-like tomb where you will have to pull several chains to open up different areas. Use your map to your advantage and make sure to access the easternmost room for a copy of the Speech skill book The Buying Game, guarded by a well-placed Battering Ram. Watch out for several draugr and frostbite spiders and continue north. Beware of the pressure plate at the foot of the stairs, which will release a flame trap. Fight the spiders in the next room, loot the shelves for some potions and soul gems then pull the chain, which will open the grating in the floor and reveal a watery pit. Take the jump and proceed forward to a chamber with several enemies, including an archer on the ledge above. Proceed to the level above and open the gate, which will trigger several swinging blade traps (at the bottom-right corner of the gate you will find a trigger for the trap, which you can remove by picking the adept lock), so cross the bridge carefully and pull the chain to make them stop. Go up another level and open the huge door.

At the end of the next tunnel, use the Arcane Enchanter if you must, then turn around and watch your ghostly guide disappear through another doorway to the right. Due to a magical seal the door ahead of you is blocked, so make your way through the doorway to the right and through another set of catacombs to fight the residing draugr. The locked door hides a master-locked treasure chest, with a boss-leveled amount of gold. In the next chamber, the gate will shut behind you and five draugr will attack. After the battle, explore the southeastern room for a chest, but beware of the dart trap protecting it. Pull the chain and head down the path. Activate the handle and watch the rock wall lower and behold the sight of the ghost sitting next to the mummified corpse of Svaknir, the Bard executed for questioning the King in ancient times. You cannot interact with the ghost, but the corpse still holds the forbidden Verse, so claim it and learn the truth behind the annual Festival in Solitude. As soon as you take the Verse, the ghost disappears and you will have no choice but to backtrack through the Catacombs.

On your way back, you will encounter the Ghost of Svaknir near the magically sealed door. He will turn towards the door, break the barrier, and run headfirst into the Chamber. Follow Svaknir to a Nordic puzzle door; it is finally time to investigate the Ruby Dragon Claw you found when you initially entered the barrow, so take an extra look and you will find the symbols Wolf—Hawk—Wolf, so adjust the corresponding images for the three rings on the door, then insert the claw in the keyhole. Proceed forward and equip yourself for a lengthy battle.

In the final chamber, the ghost of Svaknir will stand in the middle of a small pond, surrounded by draugr all seated on thrones. There are twenty-one on the ground floor, and an additional four on the ledge in the other end of the room. Everything seems quiet, until you get close to the ghost. He will then shout out: 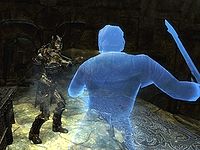 Olaf! It is time!

His words will make the entire room tremble and the first wave of draugr enemies will rise from their thrones. Eleven out of the twenty-one draugr on the ground floor will attack, ten of them will remain seated and unmoving. As a ghost, Svaknir is immortal and will pick up the fight, so you can do your best to help him out, or simply hide and wait for him to win. When all eleven enemies are slain, Svaknir will shout:

Arise, Olaf! My vengeance is at hand!

This will make the four draugr on the ledge rise and attack, so once again help Svaknir get his revenge. These draugr are all higher level than the first ones, but Svaknir will once again prove his skills and help you defeat them. When they are dead, he will finally shout out: "Olaf!" This will finally cause Olaf One-Eye himself to burst out of his coffin screaming: "Insolent Bard. Die!" He will then attack the both of you, so do your best to avoid his attacks and beware of his ability to disarm you. He can be a tough opponent, but will eventually fall to the ground and die.

The tormented soul of Svaknir will finally be set free; he will head to the nearby door, pull out his lute and disappear in a ray of light. Loot Olaf's corpse for a leveled weapon and the key to his treasury, then examine the wall behind his coffin to learn a word of Whirlwind Sprint. Unlock the treasury door and examine the area for considerable loot, then pull the lever and make your way out of the barrow.

Back in the College, Viarmo will be overwhelmed with joy when you hand him the Verse, but will soon be disappointed. He complains about the quality of the rhymes themselves, and, even worse, that some of the writing is unreadable due to age. He will, however, accept a suggestion about making the missing parts up, simply to save the Festival. The next step will involve him reciting the poem and you making up the missing parts. Reading the book Olaf and the Dragon, found in the upstairs library, will give more background about the deceitful King. Although there is no correct version, how much the court likes what you make up will affect your reward. The persuade options in particular will be very well received at court. Once Viarmo is convinced that the Verse is worth reciting to the Jarl, he will leave the College and head towards the Blue Palace, inviting you along.

Each choice gives you the listed number of points (the higher the number, the better the verse is received). The total of the two choices determines your reward.

Choice #2 (Note: There are multiple bugs with this choice.)

In the Blue Palace, you will find Viarmo in the lobby, waiting for his audition with Jarl Elisif the Fair. Ask him if he's ready and follow him up the stairs, then watch while he recites the embarrassing truth about the legendary King Olaf to the Court.
The verse: 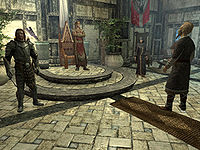 O, Olaf, our subjugator, the one-eyed betrayer;
death-dealing demon and dragon-killing King.
Your legend is lies, lurid and false;
your cunning capture of Numinex, a con for the ages.
No shouting match between dragon and man, no fire or fury did this battle entail.
(Olaf found Numinex asleep): Olaf captured a fast-sleeping dragon, a mighty feat which the meek would not fail.
(Olaf made a deal with Numinex): Olaf struck a deal to make himself king, Numinex let go though none tell that tale.
(Olaf was Numinex. A dragon in human form!): Olaf was Numinex in human form, on moonless nights he would spread wings and sail.

Olaf grabbed power, by promise and threat;
From Falkreath to Winterhold, they fell to their knees;
But Solitude stood strong, Skyrim's truest protectors.
Olaf's vengeance was instant, inspired and wicked.

The "convinced Solitude to attack" and "sacked it in dragon form" options are both bugged, causing the "disguised troops" line to be read instead. See the bugs section for more detail.

So ends the story of Olaf the liar, a thief and a scoundrel we of Solitude commit to the fire.
In Solitude bards train for their service, they also gather each year and burn a King who deserves it.

At the conclusion of the verse, Elisif will admit that Olaf was indeed a thief and a scoundrel and that the Festival is a celebration of Solitude and a condemnation of false Kings. She will reinstate the Festival and promise Viarmo a decent reward for the College. Viarmo will then turn to you and express his gratitude, even if he still will not promote you to Bard; you will have to wait until the Festival, when he will declare you a Bard in front of all College members.

The Burning of a False King[edit] 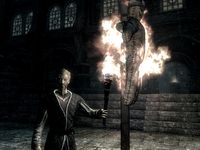 "With the lighting of the effigy..." 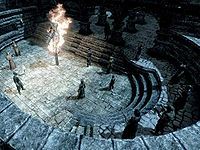 He then tells you to seek out Jorn and tell him to finish the preparations for the Festival. He will then leave Blue Palace and you are free to decide when to start the festival. Back in the College, Jorn will be excited about the news and will start right away, with a request to meet him after dark, and then the festival will be on. Wait around until 8 PM then approach him again. He will then lead you around the College, to the courtyard where every member of the College is gathered, along with several residents and the resident Bards from the local inns. Talk to Bendt, Sorex Vinius, or Evette San for free snacks, then watch and listen as Viarmo sets the effigy on fire and declares you the newest addition to the Bards College. All guests will applaud and Viarmo himself will seek you out and explain that several College professors will have jobs for you and that the burning of the King will now be a weekly event. Finally, he will hand you your reward, a leveled amount of gold, and leave you alone with the burning King Olaf.