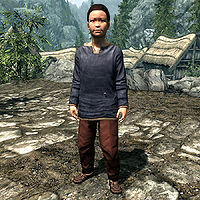 Clinton Lylvieve is a Breton child living in Dragon Bridge. He is the son of Azzada and Michel, and brother of Julienne. He wants to be a soldier, although he is too young, and spends most of his time "patrolling the town" accompanied by his pet goat Lucky.

Clinton wears blue colored child's clothes and a pair of shoes, and is equipped with a simple iron dagger. He carries a key to the family's house, a selection of food and toys, and a small amount of gold.

He wakes up at 8am and starts patrolling around the town for four hours. At midday, he returns home in order to eat lunch for two hours, before resuming his patrolling for another six hours. After this patrol he once again returns home for a two-hour dinner before heading to be at 10pm.

If you ask him about the Moth Priest during the related quest, he will be excited to share the information with you:

"I don't know what a Moth Priest is, but I did see an old man in a robe not long ago. He was riding in a wagon with some Imperial guards. They didn't stop to visit, though. They rode through town heading south, and went across the big bridge. It was only just a little bit ago. I bet you can catch them if you hurry up."

"Are you a soldier? One day, I'm going to be a soldier!"
"Pa says I'm too young to fight in the war, but I can still help by patrolling the town."
"I wish I was a soldier! They get to travel and stay up late and have fun!"
"Have you met Lucky? He's my pet goat, and he helps me patrol the town."

At home, Clinton might question his father about local woman Olda's odd relationship with the brother of her husband:

Clinton: "Father, how come Olda's so mean to everyone? She's only ever happy when she's with Lodvar, and she's not even married to him!"
Azzada: "That's no business of yours, son. Mind you keep your nose out of it."
Clinton: "Fine."