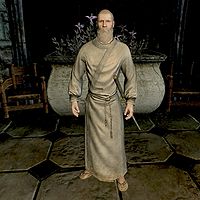 Dexion Evicus, an Imperial spellsword, is a Moth Priest. He came to Skyrim following rumors of an Elder Scroll being found. He is captured by Malkus while being escorted by Imperial guards and held in a magical cage inside Forebears' Holdout. If you sided with the Dawnguard, he will travel back to Fort Dawnguard after being rescued and remain there. If you are working with the vampires, you will make him your thrall and he will then stay at Volkihar Keep.

Dexion wears Moth Priest robes and a pair of Moth Priest sandals. He is equipped with a unique sword named the Akaviri Sword, and carries three potions of plentiful healing. He knows the Alteration spell Stoneflesh, the Destruction spells Fireball and Flames, and the Restoration spell Fast Healing.

Regardless of which side you join, Dexion will eventually become blind from reading the Elder Scrolls and wear a blindfold for the rest of the game.

This Skyrim-related article is a stub. You can help by expanding it.
Retrieved from "https://en.uesp.net/w/index.php?title=Skyrim:Dexion_Evicus&oldid=2331948"
Categories:
Hidden categories: