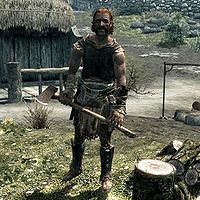 Horgeir is a Nord lumberjack and the owner of the lumber mill in Dragon Bridge. He lives at his house with his wife, Olda, and his brother, Lodvar.

Horgeir starts his day early at 6am and immediately heads out to chop wood at the mill for twelve hours straight. After a long day of work, Horgeir heads back home to enjoy a meal for four hours. After he finishes eating, he will head down to the local inn and spend the rest of the night there, until he returns back home and heads to bed at midnight.

He wears iron armor, with matching gauntlets and boots boots, and gauntlets during the day, and a belted tunic to sleep in at night. He carries an iron war axe, a belted tunic, the key to his house, and a Lumber Camp key, as well as some common items and gold.

Horgeir loves drinking a lot more than he loves his wife. This becomes clear when he greets you: "Working hard gives a man reason for drinking hard! Well, that and putting up with a wife like mine." Despite his unhappy marriage, Horgeir is in good spirits most of the time and will always make some time in order to talk to you. He may remark: "You're a well-traveled sort, I can tell just looking at you." He may also follow this up with a question: "You been to Markarth? They've got a tavern called the Silver-Blood Inn. Best ale this side of Skyrim." Horgeir will also refer to the mill having burnt down in the recent past: "Money's been tight since the mill burned down. My wife won't let me forget it." He will also explain his outlook on life to you: "They say a strong drink, a sharp axe and a good woman are all a Nord needs to be happy. Two out of three's not bad." Finally, Horgeir can also be heard saying "Rest a spell! Can't work every minute of your life."

If you speak to him while he is working, he may greet you by saying: "Make yourself useful and chop up some firewood. There's a few coins in it for you." You can also ask him if the mill has made more money due to the civil war: "Damn right it has. Demand's never been so high, at least not since I built the new mill." You can also ask him how old the nearby stone bridge is: "Hard to say. It's ancient, that much we know for sure. It was here long before the town itself. I just hope the bridge survives the war. It's the only place you can cross the Karth river for a long way in either direction. Could be if one side wants to keep the other from coming across, they might try to knock it down." He can also be asked to elaborate on his marital troubes: "Her name's Olda. If you've met her, then you probably already know what I'm talking about. I swear that woman is the most spiteful shrew in all Skyrim. I think there's a chunk of ice where her heart ought to be."

If Olda has asked you to find the Dragon's Breath Mead for her, you can instead turn it in to Horgeir, who will be happy to see his beverage returned, and reward you accordingly: "Shor's Crown, that woman never gives up. I guess that's why I married her. You're a real friend saving this mead from her. Here, let me show you how to block a punch that might be coming from some angry spouse, huh?"

If you speak with Faida at the Four Shields Tavern, she'll comment on Horgeir and Olda's relationship: "Poor Horgeir. Everyone in town knows about his wife's affair but him. Probably better if he doesn't know."

When at home, Horgeir may converse with his wife or his brother:

Olda: "Faida came by today. She says you left the tavern last night without paying for your drinks."
Horgeir: "I must have forgotten. I'll take care of it tomorrow."
Olda: "See that you do. You're an embarrassment, Horgeir. I don't know why I married you."

Horgeir: "One of these days, we'll have to find you a good woman like my Olda."
Lodvar: "Yes, I think I'd enjoy a woman like your wife."
Horgeir: "Well then, it's too bad my wife is already taken."
Lodvar: "Yes, it's a great shame. Gods willing, I'll find someone just like her one day."