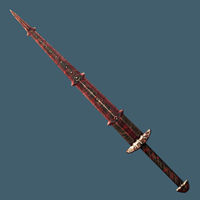 The Bloodskal Blade is a two-handed greatsword found in Bloodskal Barrow on the corpse of Gratian Caerellius. Its power attack shoots out an arc of red energy, depending on the direction of the slash. This energy is used for a puzzle within the barrow. It is also useful in combat, due to the fact that it deals damage with both the slash and the energy attack, allowing the player to hit enemies normally out of their reach. The sword also never needs recharging. It can be tempered with a silver ingot.