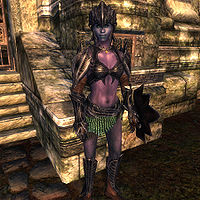 Vika guarding the way at Cylarne

Vika is a Dark Seducer Kiskengo and the warden of the door leading into Cylarne.

Until you make your appearance, she will be found standing guard in front of the gate all day long, not even eating or sleeping. Once you approach her, she will immediately stop you: "State your business. Cylarne is holy ground, unfit for mortals." Attempting to bully her into letting you enter won't do any good and, depending on your race, you will receive one of various replies. If, however, you inform her that you are an emissary of Sheogorath, she will hand you over Cylarne's key and say: "Then you are free to enter the Shrine of the Flame of Agnon. This key will allow you passage through any door in Cylarne." She will also add in a sad voice: "The Flame is lit from the Shrine's two Altars. Once the Aureals are driven out of Cylarne, it will be our pleasure to light the Flame for Sheogorath. The Grakedrig Ulfri will explain everything. You should speak to her at once." She then proceeds to unlock the gate before returning to her post.

When the battle for Cylarne finally starts, she will set off to fight the attacking Aureals in whatever direction you recommended. Once the battle is won, she will kneel down in front of it until Ulfri sacrifices herself. Once the Flame is lit, she will be found wandering around the newly-conquered altar. If you decided to aid the Aureals, she will be slain by her foes in the depths of Cylarne.

If you chose to insult Vika, your race will affect her reply:

In addition, she may also say: "Is that truly the best you can do? Your "wit" might be better suited to the Aureals across the way." or "You're not very good at this are you?"