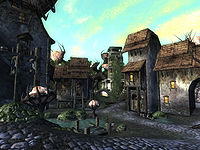 Passwall is a village located inside The Fringe, just west of the Gates of Madness (quest-related).

The center of town consists of two houses and an inn, The Wastrel's Purse, offering food and accommodation. A latecomer, Jayred Ice-Veins, built up a house to the southeast of town, near the lake. The village is surrounded by architectural evidence of an earlier and much larger civilization, which is also hinted at by Dredhwen in her dialogue. Shelden is the self-proclaimed mayor, since he was the first citizen to arrive.

All of the inhabitants are hopefuls waiting for "Sheogorath's blessing" in order to pass the Gates of Madness, located just up the hill, and enter the Isles proper. Once you manage to defeat the Gatekeeper, however, only Jayred will take the big step and leave the Fringe.

During the Retaking The Fringe quest, Passwall is overrun by the forces of Order and is therefore transformed into a barren, grey landscape bristling with obelisks. The town itself is the epicenter of the battle between Lord Sheogorath's troops and the Knights of Order.