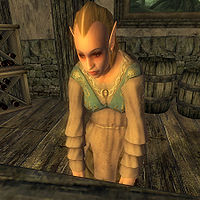 Dredhwen sleeping in her inn

Dredhwen, a Bosmer publican, is the owner of The Wastrel's Purse in Passwall. She was the second to arrive to The Fringe, right after Shelden, and spends her time renting out rooms while selling the stuff the former Passwall residents left behind. During the quest Through the Fringe of Madness, Dredhwen has a very special guest living upstairs, the powerful Sorceress Relmyna Verenim, mother and creator of the formidable Gatekeeper.

Her hunched appearance is due to her being asleep on her feet all day long. Although this means she is effectively blind and cannot see the player taking items from in front of her, it doesn't stop her from serving her customers 24 hours a day. During Retaking The Fringe, after you have escaped from Xeddefen, she will move around outside of the inn without ever noticing the chaos and changed appearance of Passwall. After the main quest is complete, she will disappear from the game.

She has 300 gold and a Mercantile of 50, which means she offers worse deals than most merchants. She will buy weapons, armor, books, ingredients, potions and miscellaneous items and sell the same goods except for armor but will also offer scrolls. She does not offer services during the Retaking the Fringe quest.

She wears the standard Mania lower-class brown tunic and a pair of green felt linens. Her only other possession is a leveled amount of gold. She is a rather peaceful character and doesn't wield any weapons or use any spells, relying solely on her fists if things turn for the worst.

Upon first meeting her, she will fill you in on a bit of Passwall's history: "Hello, I'm Dredhwen. No one was running this place when I got here. They left plenty of things behind, though. What do you need?" If you inquire further she will tell you: "I took over the inn when I got here. There wasn't anyone living here. Except for Shelden. He says he's Mayor. Don't believe it." If you question her on the gate near town she will confess: "I feel like I need to be on the other side. I'm just not sure how to get in." If you have yet to experience the demise of the Adventurers near the Gates of Madness she will tell you about the Gatekeeper: "He protects the Gates of Madness. He'll kill anyone who gets near. He's about to destroy some adventurers up there now." After the Adventurers have been slain, Dredhwen will tell you about her mysterious tenant: "He protects the Gates of Madness. He'll kill anyone who gets near... anyone except Relmyna Verenim. She's staying upstairs right now." If you succeed in killing the mighty guardian she won't show any real interest: "He's dead? Hmm. Of course, I'm too tired to walk all the way up there at the moment. I'll head up there after I rest my eyes for a moment." On the topic of the gates she will sleepily tell you: "Oh, the Gates are unlocked? Very good. I think I'll just rest my eyes for a moment, then I'll go through and see what's on the other side."

On subsequent meetings, her sleepy nature will appear quite obvious; due to her being half asleep at all times, she only detects you rarely. If she do she may say: "Oh, hello. Didn't realize anyone was there.", "What'd I miss?" or a confused "Huh?" When you try and talk to her, she will sleepily say: "Excuse me, I must have nodded off there.", "Oh, hello there. Were you standing there for very long? I didn't notice you." and "Huh-what?" When exiting conversation, she will add one of the following lines: "I think... I'll just rest my eyes for a moment.", "I'm so tired." or "I hope I'm not dreaming." If you talk to her during the final stages of Retaking The Fringe she will say: "Everything is just so... desolate. My inn is ruined and... oh, it's terrible..." and on subsequent meetings she will say: "You'd think that after all this work, I'd finally be able to get some sleep."

Nanette Don, when asked about Passwall, will also tell you: "It looks like other people lived here before. Dredhwen's been selling what they left behind. So, if you need something, talk to her. She's in the Wastrel's Purse."

At different stages in the Main Quest, Dredhwen will share different rumors with you and other NPCs: