Shivering:Through the Fringe of Madness

After first entering the Fringe, travel along the meandering main path until you reach the small town of Passwall. You'll quickly encounter two residents discussing the imminent fate of a band of adventurers that just passed through. Speak with the Redguard named Shelden, the self proclaimed mayor of Passwall, to learn of the nature of the Fringe and, more importantly, about the Gatekeeper found northeast of Passwall.

Traveling in that direction, you will arrive at the Gates of Madness: the passageway to the Shivering Isles proper. The Gates consist of two doors, the left leading to Mania, the right to Dementia, both of which are guarded by the Gatekeeper of the Fringe. Already underway is a severely one sided battle between the Gatekeeper and the group of steel plate armored adventurers you heard about in town, complete with cheering onlookers Shelden and Felas Sarandas . The adventurers are no match for the massive abomination, and they will all perish in their futile attack. After all the adventurers have been slain, their captain will flee the Isles, exiting through the Door to the Heartlands.

A subsequent quest update will suggest speaking to the residents of Passwall about the Gatekeeper. By questioning Passwall's citizens, you will discover that the keys to the Gates are sewn into the Gatekeeper's body and killing it is therefore the only option to enter the Isles.

There are multiple methods of defeating the Gatekeeper. The most straightforward is simply to fight it as-is. The Gatekeeper is leveled, possesses a large pool of hit points and is capable of healing itself. Fortunately, there are ways to turn the fight in your favor. 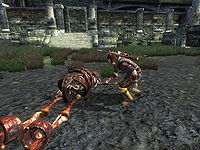 Some residents of Passwall may inform you of Jayred Ice-Veins, a bone-obsessed Nord sharpshooter with a burning desire to kill the Gatekeeper and enter the Isles. Speak with Jayred, who will reveal that bones taken from the corpse of a slain Gatekeeper can be fletched into arrows that are particularly effective against his brother:

"They say the Gatekeeper's magical. I don't believe in magic. But I do believe in bones, and the best way to kill something is with the bones of its own. I can see the bones of a dead Gatekeeper in the courtyard of the Gardens. The door's locked, though. You'll pick that lock, and I'll collect the bones. Then I'll make some arrows, and we'll kill the Gatekeeper. Sound good?"

The Gardens Jayred mentioned in which the remains of the previous Gatekeeper can be found are in fact the Gardens of Flesh and Bone, located at the top of the hill west of Passwall. He will give you a single free lockpick and then head straight for the Gardens. Follow him to the gate and pick the lock, which is always of very easy difficulty. Inside the courtyard, defeat the three skeletal shambles that guard the courtyard however you see fit, but beware the frosty explosions that occur upon their death. Jayred will collect the bones from the remains of the dead gatekeeper and tell you to return in a few hours for the arrows. Return to him two hours later and he will have 20 Gatekeeper Bone Arrows ready for you. You can also ask him to follow you around the Fringe at this point, and he will do so until either he or the Gatekeeper are put down. 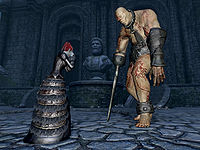 Locate Nanette Don somewhere in Passwall and bump her disposition to 70 or higher before asking about the Gatekeeper; she will hesitantly reveal a serious flaw in the Gatekeeper that you may be able to exploit:

"I've been dying to tell someone. You seem trustworthy enough... but don't tell Relmyna I said anything! Her Gatekeeper is flawed! Her tears hurt him!"

If you push the subject, she will further elaborate by explaining what exactly the tears do, and more importantly, providing you with an opportunity to collect them:

"Her tears somehow agitate the daedra bound to the Gatekeeper's body. Her tears make it really restless. It strains harder against the warding magic. She may seem like a tough woman, but the Gatekeeper makes her all weepy. Go see for yourself. She visits him every night, around midnight."

Searching Relmyna's room at the Wastrel's Purse will reveal a love letter to Lord Sheogorath on her desk that confirms Nanette's claims. Wait until midnight and travel surreptitiously to the Gates of Madness. Take care not to be noticed by either party, as Relmyna will leave and the Gatekeeper will try to kill you. If you remain undetected throughout the meeting, you will receive a quest update informing you that Relmyna has dropped a handkerchief. Pick up the handkerchief and you will be granted three bottles of the poison 'Relmyna's Tears.'

Now armed with the appropriate weapons, travel to the Gates of Madness and engage the Gatekeeper. If Jayred is accompanying you, he will attack the Gatekeeper with his own set of Gatekeeper Arrows, and may well be slain in the fight. If you have acquired both the Gatekeeper Arrows and Relmyna's Tears, poisoning your bow of choice with the tears is a very effective method. After the Gatekeeper has been defeated, claim the "Key to Mania" and the "Key to Dementia" from his corpse. As soon as you collect your spoils, Haskill will appear and offer some more general guidance relating to the Isles, including information on Mania and Dementia; the two sides of madness that form the realm:

"So, you've managed to kill the Gatekeeper. Pity. Well, you'll now be able to enter the Realm proper. You'll notice there are two doors. One leads to the lands of Mania. The other to Dementia. Enter through either one. The lands are quite distinct, but both are Sheogorath's domain. You'll want to seek out Lord Sheogorath. I believe He has plans for you. Try not to disappoint Him."

Of course, if you'd like more information on the realms of the Isles, Haskill will grudgingly humor you. When asked for more detail on the lands of Mania, he tells you that:

"The lands of Mania are bright, vibrant, and full of color. You'll find its inhabitants reflect the land itself. If you wish to meet the residents of Mania, you'll find them in the settlements of Hale and Highcross. Take care, though. Though the citizens and creatures of Mania are colorful, they can often be quite deadly. I'm sure you can handle it, though."

His description of the realm of Dementia is of similar use:

"The lands of Dementia reflect the darker side of its residents. It is easy to get lost among the tangle of roots growing out of the ground. If you wish to meet Dementia's citizens, seek them out in Deepwallow or Fellmoor. I'm sure they'll welcome one such as you with open arms." 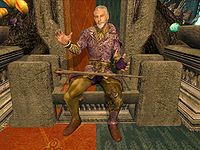 You've made it into the Isles. Good job.

You are then given a choice of which Gate you wish to enter the Isles proper through. If you choose to enter via the door to Mania, you will be granted the Blessing of Mania: a Frenzy Greater Power. If you choose instead to enter through the door to Dementia, you will be granted the Blessing of Dementia: a Demoralize Greater Power. Either way, once you are on the other side of the Gates of Madness, your journal will update and instruct you to seek out Lord Sheogorath in the capital city of New Sheoth on the other side of the main island; a journey you must make on foot. There are two routes available to you, though neither one is necessarily better: to the north lies Overlook Road which winds through the vibrant lands of Mania and eventually leads to the gates of New Sheoth's Bliss district, while to the south, The Low Road traverses the swamps and bogs of Dementia and ends at the gates of the Crucible district. Once in the capital, make your way to Sheogorath's Palace and speak with the Prince of Madness Himself to complete the quest and receive some small, but telling, insight into his personality:

"A new arrival! A shame about my Gatekeeper. I'm so happy, I could just tear out your intestines and strangle you with them. I suppose an introduction is in order. I'm Sheogorath, Prince of Madness. And other things. I'm not talking about them. You've probably figured that out by now. Let's hope so. Or we're in real trouble... and out come the intestines. And I skip rope with them! But, perhaps now's not the time. You've made it this far. Farther than anyone else. Well done! Take this trinket of mine. Perhaps it will serve you well. Or look lovely on your corpse."

With that, you are awarded the Charity of Madness, an amulet with a leveled Resist Frost, Shock and Fire enchantment as well as the Key to Mania or the Key to Dementia if you only collected one from the corpse of the Gatekeeper. This same conversation will begin the next quest as well.

Close the console and the battle should proceed normally, although the captain won't join in.