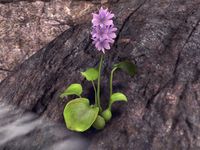 Water Hyacinth is a large purple flowering plant and alchemy reagent that only grows near water sources. It can be found growing in all zones, with the exception of Coldharbour (outside of the Hollow City).

This chart lists only combinations in which two or more of Water Hyacinth's effects are present.

Water Hyacinth is also used in one Provisioning recipe: