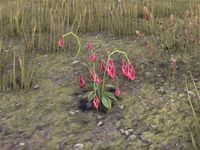 Columbine is a small plant with many drooping pink flowers, which yields the Alchemy reagent of the same name. It is a prized ingredient for many potions due to its effects. Due to its usefulness, Columbine sells for a high price when trading with other players. Columbine can be found growing in all zones, with the exception of Coldharbour (outside of the Hollow City). Like the other non-mushroom plants, it tends to grow out in the open.

This chart lists only combinations in which two or more of Columbine's effects are present.

Columbine is also used in a few Provisioning recipes: