The UESPWiki – Your source for The Elder Scrolls since 1995
< Elder Scrolls Online: Alchemy / Items: Reagents
Jump to: navigation, search 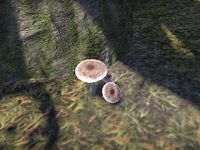 White Cap is a pale fungus and alchemy reagent. It can be found growing in all zones, except for the very first zone of your Alliance. Like the other mushrooms, it tends to grow at the base of trees and around rocks, not in open spaces.

This chart lists only combinations in which two or more of Water Hyacinth's effects are present.

White Cap is also used in one Provisioning recipe: