The UESPWiki – Your source for The Elder Scrolls since 1995
< Online: Places: Reaper's March / Realms
Jump to: navigation, search

There are trickster spirits in many of Tamriel's cultures. The Khajiit and Wood Elves have raised one to the level of a major Divine. To them, Baan Dar represents genius, sly innovation, and agile wits. He is the nimble escape when trapped in a tight spot. 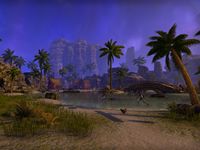 The Five Finger Dance is the realm of Baan Dar, who hosts an eternal party for bandits, pranksters, and merrymakers. It is accessed by a portal from Thormar opened during Baan Dar's Boast, which leads to the Khajiiti manor on the south side of the realm. The realm is centered around a shallow lake, with many docks, palm trees, and tents surrounding it. A stage for bards and dancers is found northeast of the lake, and a bar for food and drinks is found in the southeast. 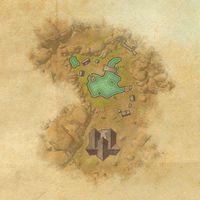 A map of the Five Finger Dance

This Online-related article is a stub. You can help by expanding it.
Retrieved from "https://en.uesp.net/w/index.php?title=Online:The_Five_Finger_Dance&oldid=2089204"
Categories:
Hidden categories: