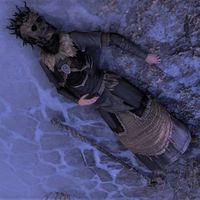 Sister Hiti is a member of the Icereach Coven who specializes in fire magic. She can be found on their island home of Icereach

After encountering Lyris Titanborn who is also fighting her way through the fortress, you exit the underkeep and enter an outdoor area with an altar. Hiti and Sister Skelga will be arguing before they notice you.

Sister Skelga: "I knew this ritual would bring trouble. Your new patron asks too much of us!"
Sister Hiti: "Enough of your mewling! These slow-witted Nords pose little threat."
<They notice you.>
Sister Skelga: "Look here. More of them! Stay out of my way, Hiti."
Sister Hiti: "I do as I please, sister!"

During the fight Hiti will use her fire magic, uncaring if it inadvertently gets in the way of Skelga's own attacks. When this happens, the pair will argue. Both characters have a pool of dialogue lines which are randomly chosen:

Sister Hiti: "Step aside, Skelga. I'll burn them alive!"
Sister Skelga: "Your flames are a blight shrew. Go join the rest of your coven."

Sister Hiti: "Enough fooling about. Burn!"
Sister Skelga: "Leave this to me witch!"

Once you kill Skelga, Hiti will swear vengeance before teleporting away.

Sister Hiti: "Skelga? Skelga! You … I'll burn you to cinders for this!"

Sister Hiti is encountered again as you reach the courtyard where the storm ritual is being performed.

Sister Hiti: "They killed Skelga! Right in front of me!"
Sister Gohlla: "Settle, Hiti. You'll disturb the ritual! It must be perfect. Isn't that right, mother?"
Mother Ciannait "It is, dear one. Our patron's terms were fair, Hiti. If we wish to reap the reward, we must deliver what he desires."

Once the final fight begins, Gohlla will teleport down with four of her surviving sisters. At Mother Ciannait's direction, she will drop her shield and attack you directly with fire magic. When Ciannait calls for more power to channel the Storm Surge, you can interrupt her along with her sisters.

This Online-related article is a stub. You can help by expanding it.
Retrieved from "https://en.uesp.net/w/index.php?title=Online:Sister_Hiti&oldid=2184905"
Categories:
Hidden categories: