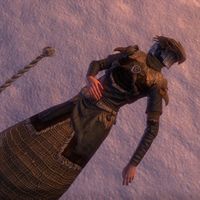 Sister Gohlla is a member of the Icereach Coven's inner circle, headed by Mother Ciannait. She is the "mother" of the giant Kjarg the Tuskscraper and specializes in frost magic.

She is first encountered in the Underkeep on the balcony above Kjarg and will encourage him to fight you.

Sister Gohlla: "More intruders? Marvelous. On your feet, my sweet boy. Smash them for mother, won't you?"

During the fight, she will support him by summoning Frost Atronachs.

She will also summon frozen winds that whirl around the room.

When you kill Kjarg, she will flee while promising vengeance.

Sister Gohlla is re-encountered in the courtyard on the ramparts. She will be with the other witches, performing the storm ritual and can be overheard as you approach.

Sister Hiti: "They killed Skelga! Right in front of me!"
Sister Gohlla: "Settle, Hiti. You'll disturb the ritual! It must be perfect. Isn't that right, mother?"
Mother Ciannait "It is, dear one. Our patron's terms were fair, Hiti. If we wish to reap the reward, we must deliver what he desires."

Once the final fight begins, Gohlla will teleport down with four of her surviving sisters. At Mother Ciannait's direction, she will drop her shield and attack you directly with frost magic. When Ciannait calls for more power to channel the Storm Surge, you can interrupt her along with her sisters.

This Online-related article is a stub. You can help by expanding it.
Retrieved from "https://en.uesp.net/w/index.php?title=Online:Sister_Gohlla&oldid=2191238"
Categories:
Hidden categories: