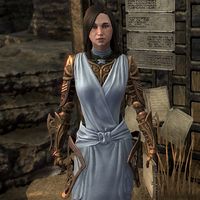 Novice Holli is an Imperial Apostle who hands out daily quests involving the two delves in Clockwork.

You will be unable to start one of her quests without having first either repaired the systems in the Halls of Regulation or investigated a missing apostle in the Shadow Cleft. Each delve's quest is a prerequisite for their daily; thus, if you only complete one you will only have three potential dailies.

"The Clockwork Apostles have need of someone with your skills, if you could spare the time. We'll pay you for your efforts. A good rate, if I do say so myself.
And Adjunct Daro has spoken highly of you."

Your possible responses are:

What's the job?
What does Adjunct Daro need help with this time?
What's the problem this time?
How can I help?

"We require someone to replace several commutators within the Halls of Regulation. You'll need to have combat skills, as the repair factotums both refuse to do their work and attack anyone who tries to do it for them."
What are the details?
"You need to exchange the galvanic engine's used commutators with new ones. Replacements can be found within the factotums. Naturally we offer a reward for anyone who can complete this task.
For more information talk to Initiate Tilelle."
I'll take the job.
"With you on the job, this situation should be resolved before the next turn of the gear."

"The Halls of Regulation is in need of vitally important maintenance. This particular task involves oiling a rusty ventilation fan. Simple enough, if not for the malfunctioning repair factotums constantly attacking anyone who enters."
What are the details?
"You'll not only need to fend off the factotums, but collect saturated oil from them as well. We believe this oil to be crucial to the ventilation fan's maintenance.
For more information talk to Initiate Tilelle. She's our current expert on the subject."
I'll take the job.
"There hasn't been this much trouble in the Clockwork City since—well, since any time I can remember. That's why I'm grateful you agreed to help.
Now if you could get on with it, I'd feel even better."

"The Shadow Cleft represents a serious threat to the Clockwork City. Adjunct Daro sent another apostle through the portal to investigate, but he hasn't returned.
We need someone competent to go in and find Novice Oscard."
Why don't the Clockwork Apostles just seal the portal?
"We will seal the portal—after we learn everything we can about why it's here and what's on the other side. For your troubles, the apostles are willing to pay a substantial reward.
Go see Adjunct Daro if you need more information."
I'll enter the Shadow Cleft and find Novice Oscard.
"There hasn't been this much trouble in the Clockwork City since—well, since any time I can remember. That's why I'm grateful you agreed to help.
Now if you could get on with it, I'd feel even better."

"A Mages Guild member named Evoker Tadari found herself stranded in the Clockwork City ages ago. Since then, she's helped the apostles on more than one occasion. When she heard about the Shadow Cleft, she readily agreed to examine it for Adjunct Daro."
Let me guess. She went into the Shadow Cleft and never emerged.
"Very perceptive. I knew you were the right person for the job!
Talk to Adjunct Daro if you want more details. Otherwise, head into the Shadow Cleft, locate the missing mage and the perception tabulator we provided, and return to claim your reward."
I'll find Evoker Tadari and the perception tabulator inside the Shadow Cleft.
"Thanks for agreeing to help. With all the sudden interest in the Clockwork City, the apostles are stretched pretty thin."

"Adjunct Daro sent Initiate Favar into the Shadow Cleft to perform a thorough analysis with his perception tabulator. He had some sort of malfunction, though, and left the device behind. Worse, he failed to return at the appointed time."
So what do you need me to do?
"Take this perception tabulator, return to the Shadow Cleft, and perform Favar's analysis. And while you're in there, try to find our poor initiate.
If you require additional details, talk to Adjunct Daro. You can find him in the Grand Depository."
I'll use the perception tabulator and try to find Initiate Favar.
"With you on the job, this situation should be resolved before the next turn of the gear."

"I may be simply a novice, but I heard about your exploits since you arrived in the Clockwork City. If you have the inclination, Adjunct Daro and the Clockwork Apostles could use your help.
We'll pay, of course."
Why is a Clockwork Apostle novice handing out jobs?
"When a hammer gets caught in the gears, it's the duty of every apostle to roll up their sleeves and help.
Besides, if I can put things back to some semblance of order, I'm sure to move up in the ranks. Everyone benefits, you see?"