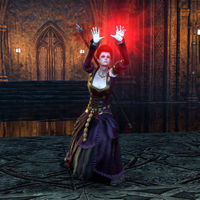 Lady Essenia is a Breton elder vampire who is also known as the Blood Queen. She was the most recent master of Greymoor Keep, before she capitulated to serve under Rada al-Saran. Afterwards, Lady Essenia rediscovered her passion for study, researching and experimenting on vampires of other bloodlines to unlock their secrets.

Essenia can also be witnessed in visions in the Midnight Barrow involving Jarl Hagridden and his downfall.

Prisoner of the Past[edit] 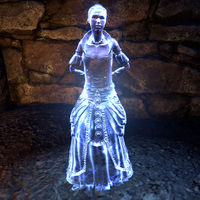 Vision of a past Essenia

While helping Alwyn collect her ancestor Jarl Hagridden's remains scattered around the barrow, you will both witness visions associated with him. Lady Essenia will appear in two of them.

Lady Essenia appears to be speaking with a thane:

Lady Essenia: "Jarl Hagridden has a matter of urgency for you to attend to."
Reach Warrior [sic]: "What does he know to send us this far into the Reach?"
Lady Essenia: "You have your orders, thane. I trust you know enough to carry them out."
<The vision disappears.>
Alwyn: Who was she to be bossing a thane around?"

Lady Essenia: "Don't you love me, Hagridden? Do you want to see me grow old, wither, and die? It's a small sacrifice for eternity."
Jarl Hagridden: "Listen to yourself, Essenia. Even one life is too many! I can't make that kind of sacrifice. Not even for you."
<The vision disappears.>
Alwyn: "Sacrifice? Just what was that woman asking for?"

While searching for Adusa-daro with Gwendis, you will learn that Lady Essenia is using her to unlock a "new transformation". She is finally encountered in the Cathedral of Blood, when Essenia notices you, she will give orders to the nearby Bloodknight before she retreats into the chamber behind her.

Lady Essenia: "Intruders? No! The ritual is almost complete. Deal with them."

When you enter the Ritual Chamber, Adusa-daro can be found suspended in the air while light surrounds her. Far below, Essenia is channeling her power.

Adusa-daro: "Gwendis! Help me!"
<The ritual is completed and Adusa falls the ground with a thud.>
Lady Essenia: "You're too late! The experiment nears completion. The heir of Verandis is mine!"

She can then be fought and will use shadow and ice magic.

Once she is dead, Gwendis will run over to Adusa's body:

However, the ritual will have proved successful as Lady Essenia will then reemerge out of the blood pool surrounding the platform, her form changed into something more than that of a normal vampire:

You will also need to destroy this body of hers. She will use abilities similar to the Harrowing Reapers, but downscaled in power.

Summon Singularity
Harrowing Energies
Reaper's Harvest
Drags you towards Lady Essenia if you stand in the large, expanding aoe. Deals major Oblivion damage if you are caught in the resulting explosion.