The UESPWiki – Your source for The Elder Scrolls since 1995
< Online: Places: Auridon / Guildhalls
Jump to: navigation, search 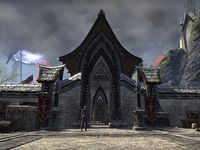 This Fighters Guild is the Firsthold branch of the Fighters Guild. It is an Altmer-style two story building, although the upper floor is not accessible. Outdoor area contains a small archery range and several training dummies. Storage containers and weapon stands found here are not owned, thus all the findings are free to take with no consequences. Inside the building consists of a one-room circular hall with a long vestibule leading to it. All the weaponry and pieces of armor found here, as well as dressers, sacks, cupboards and barrels, are owned. Taking any of the items will be counted as crime.

Guildhall services becomes accessible only after the successful completion of the Sever All Ties quest during which you need to clear Firsthold of Veiled Heritance and their Daedric allies. While the enemy is crushed and the city is liberated, devastation of the invasion still can be clearly seen on the premises of the guildhall. There are several Dremora corpses outside. Inside you will find the hall steward mourning fallen comrades, Duzuni, Halelmathras and Siniaritaale, whose bodies are being prepared for the burial. Several Guild Blades guard the premises inside and outside.

This Online-related article is a stub. You can help by expanding it.
Retrieved from "https://en.uesp.net/w/index.php?title=Online:Fighters_Guild_(Firsthold)&oldid=1879394"
Categories:
Hidden categories: