The UESPWiki – Your source for The Elder Scrolls since 1995
< Online: Places: Reaper's March / Elven Ruins / Delves
Jump to: navigation, search

For generations, tomb robbers have been trying to find their way into the halls beneath the Ayleid ruin known locally as Fardir's Folly. Word has reached Dune that they may finally have succeeded. 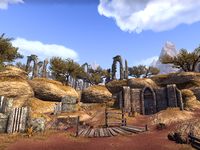 Fardir's Folly is an Ayleid ruin in northeastern Reaper's March, north of Fort Sphinxmoth containing raiders. They are led by Ravo Peltrasius. There are more than a dozen bookshelves in the ruin and an Ayleid Well.

This Online-related article is a stub. You can help by expanding it.
Retrieved from "https://en.uesp.net/w/index.php?title=Online:Fardir%27s_Folly&oldid=2161246"
Categories:
Hidden categories: