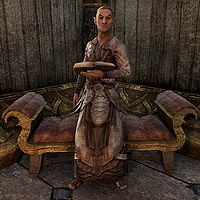 Edhelorn is the current Silvenar and Dominion ambassador, who has come to the island of Khenarthi's Roost in a bid to get it to join the alliance. However, the Maormer have a standing treaty with the island's inhabitants and their ambassador has become increasingly obstructive in any forays at an agreement.

He can initially be found inside the Chancery in the port city of Mistral, where you can help him with his diplomatic mission.

As the Silvenar, he is not referred to by his given name. According to him, even the Green Lady calls him "the Silvenar".

After meeting Razum-dar in Mistral, he will ask you to talk with the Silvenar and assist him.

"Your pardon, friend. The Dominion's arrival on Khenarthi's Roost has upset the locals. It falls on me to smooth the waters.
Please, help yourself to food or drink. I'm happy to speak with you once this matter is settled."
<Hand Razum-dar's token to the Silvenar.>
"Most unexpected! It seems we have a mutual friend.
May I ask, what brings you to Mistral?"
Our mutual friend thought you could use my help.
Then perhaps you can advise me on a small matter. The Maormer have a treaty with Khenarthi's Roost. This is nothing to fear; a treaty is something I can work with.
Yet neither Ambassador Ulondil nor Headwoman Harrani will produce a copy."
Why not?
"Indeed. Why not?
It would be indecorous to suggest the treaty is anything but actual and sound, yet I fear it won't present itself without a more active line of inquiry. Would you be my voice in this with Ambassador Ulondil and Headwoman Harrani?"
You want me to ask them for a copy of the treaty?
"Exactly. A chorus of requests may succeed in carrying the tune. Harrani in particular seems eager to see this resolved, though I fear the Dominion presence binds her hands.
But I'll leave you to it!"

If you talk with him again, he will thank you for the help,

"Thank you for making your services available. I'm confident we can resolve this amicably."

Once you have spoken with Harrani and Ulondil and found both refuse to show the treaty, you tell the Silvenar.

"Any luck securing a copy of the treaty?"
Ulondil and Harrani refused to provide a copy.
"Then there's little chance for compromise. I'll call a break in formal talks until everyone calms their nerves.
You understand the stakes, yes? It's why I ask you to take a more active role in locating the treaty. I don't do so lightly."
What do you mean?
"I can't allow the Dominion's first act on Khenarthi's Roost to be one of conquest.
I understand our mutual friend prefers the rum served at a nearby tavern. Perhaps he would have ideas on securing a copy of the treaty."

Is the Silvenar your real name?
"It's a name, a title, and our holy city. Quite an honor to carry around such an important word, and the occasional burden in its confusion of outsiders.
Not even the Green Lady calls me by my given name. "Edhelorn" doesn't roll off the tongue, I suppose."

How long have you held this position?
"As Silvenar? Seems like it's been such a short while, but the wrinkles on my face tell me differently.
Or did you mean as Dominion envoy? I've taken on diplomatic tasks for our fledgling alliance since its inception. So, not very long at all."

What is your opinion of the Aldmeri Dominion?
"A freshly grown fruit, still without blemish. On behalf of the Bosmer people, it's my goal to keep it that way.
If you speak with the Green Lady, don't mistake her manner as distaste for the Dominion. She simply misses our home of Valenwood."

Who is the Green Lady?
"She sustains me, and I her. Together, we are the aspirations of the Bosmer people given form. Put simply, she is the love of my life.
Also, she grows ill-humored when I gush about her within earshot. I'd best say no more."

Sadly, when you try to talk to him next time after securing the treaty, you find him dead in Ladrelas' House.

<A strange aura surrounds the Silvenar's corpse. His body is warm to the touch. A faint smell of sulfur permeates the room.>