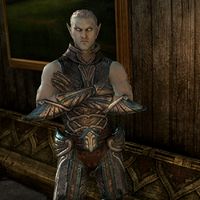 Ulondil is a Maormer ambassador living in Mistral who is trying to sort out a conflict regarding the treaty between his people and the locals of Khenarthi's Roost, as he is opposed to the Aldmeri Dominion's recent presence in the area. He is very hostile about the topic, and greatly dislikes the Silvenar.

He is also involved in the plot regarding the Tempest.

If you talk to him before talking to the Silvenar, he'll only say:

"The Dominion's invasion of Khenarthi's Roost will not end well."

After talking to the Silvenar, you can question him about the treaty between the Maormer and Khenarthi's Roost.

"We upheld our treaty with the people of Khenarthi's Roost for generations, and this is how they repay our kindness?
We will not allow High Elf thieves to gain a foothold in our territorial waters!"
The Maormer claim Khenarthi's Roost?
"By all rights, this is our island! Harrani's people occupy it with our blessing.
If she breaks the treaty, so breaks our truce. We'll take back our island, and the Khajiit will pay the price."
Where is this treaty?
"We keep our copy on an island far from here. I see no reason to send for it. I won't allow High Elf wharf-rats another chance to take our rightful lands!
Why don't you bother Harrani for her copy?"

When both parties refuse to show a copy of the treaty, Razum-dar point you in the direction of Maormer's Embassy where Harrani's stolen copy was hidden in Ulondil's quarters. However, when you return to the Silvenar, you will find him dead. When you arrive in the Chancery to tell Harrani the news, Ulondil is still there, eyeing Pelidil.

"I don't care whose ear this High Elf covers with kisses, I won't let Khenarthi's Roost fall to Dominion invaders!"

Once Harrani hears about the death, she will appoint you to investigate. Pelidil and Ulondil will also join the conversation:

Vicereeve Pelidil: "The Silvenar, murdered? These treacherous Khajiit have plotted with the Maormer to slay our noble envoy!"
Harrani: "How dare you! The Silvenar was our guest! You go too far, Vicereeve!"
Ulondil: "Outrageous! More Dominion treachery. I will conduct my own investigation!"
Vicereeve Pelidil: "No sea-rat will show me up. I'll get to the bottom of this myself!"

You have the opportunity to listen to Ulondil's theories before heading out.

"The Dominion's invasion of Khenarthi's Roost will not end well."
You think someone from the Dominion killed their own diplomat?
"High Elves are known to cut off their ears to spite their face. Who would be a better example of such hubris than Vicereeve Pelidil, puffed up lackey to Prince Naemon himself!"

After reading Harrani's reports, one of the leads mention the Hissing Phial. Though when you arrive, Apothecary Mizibir has already been captured by Ulondil.

"This apothecary must have had a hand in the murder. I'll get it out of him, one way or another." 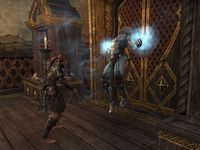 Once you have followed up on all three leads and worked with the Green Lady to track down the assassin, who confesses who gave her the order. You can then go and confront Ulondil who can be found outside the Embassy with Harrani and Pelidil.

"Ah, the errant deputy.
I was just informing Headwoman Harrani of her apothecary's connections to the High Elves of Summerset Isle. Once the torture begins, we'll learn why the Dominion killed their own diplomat."
Your assassin said you ordered the Silvenar's death.
"My what?
You mean the apothecary? I assure you, he was never in my employ?"
Your assassin bought Daedric blood from the apothecary and used it to kill the Silvenar.
"Oh, well done.
It doesn't matter now. The Green Lummox and her idiot husband lie dead. There's nothing you can do to stop us."
The Green Lady isn't dead.
"You're lying! She must be dead, or else she'd have come for me!
She's coming for me, isn't she? I … I'm a duly appointed ambassador of the Maormer people. The grounds of the embassy are sacrosanct, according to our treaty!"

Ulondil will try to escape, but not before a last warning:

Ulondil: "The tempest is coming. You cannot stop it!"
<Ulondil runs off into the Embassy.>
Pelidil: "Sea-rat coward! I'll have your head for this!"
<The Green Lady runs past.>
Green Lady: "I have his scent. And soon, his heart."
Harrani: "Stop, all of you! This madness ends now!"

Follow the Green Lady to the Embassy at Harrani's request to stop her from killing Ulondil. You will find him cornered on the second floor and you have the option to talk to him.

"Mercy, please, mercy! Save me from this madwoman!"
You surrender?
"I do! By all the gods, I do!"

You'll get what you deserve.

Talk to the Green Lady and intervene, you can decide whether to stop her or let her kill him.

Should you convince her to leave him alive, Ulondil will have his wits bound and will walk outside.

Ulondil: "Keep her away from me."

Once outside, he will have been taken into custody. If you talk to him there, he'll say:

"It doesn't matter. The tempest is coming. Nothing can stop it, not even … her."

Should you let her kill him, you can witness the start of his torture: