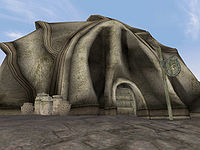 The Ald'ruhn Guild of Mages is the Mages Guild branch in Ald'ruhn, found near the Guild of Fighters and the Silt Strider.

Edwinna Elbert is the local head of the guild, and will allow you to join and provide quests immediately after joining. This guild hall is apparently a place of education, as Movis Darys is staying in the guild undercover as a student there. The guild provides many services, especially in merchant services. Anarenen and Tanar Llervi will both barter with you, while Heem-La and Orrent Geontene will both sell you spells.

This guild hall is (almost) abandoned during the quest Loot the Mages Guild for the Thieves Guild, save Manis Vermaulese, who is sent to guard the guildhall while the remaining members are away.

With Bloodmoon installed, Louis Beauchamp can be found standing outside the Guild of Mages. 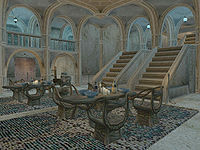