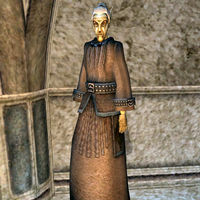 Anarenen is an Altmer alchemist and an Associate of the Guild of Mages. Anarenen can be found on the lower level of the Ald'ruhn Mages Guild, on the southern side of the twin stairs. He is a restocking vendor of the following ingredients: bloat, bonemeal, comberry, crab meat, diamond, fire salts, heather, and vampire dust. He also offers medium training in Alchemy, Conjuration, and Enchant.

His outfit consists of a common robe with matching shoes, and he carries an assortment of his apparatus wares. Aside from his natural weaknesses to fire, frost, shock and magicka, his natural bonus to magicka, and resistance to disease, he knows no spells.