The UESPWiki – Your source for The Elder Scrolls since 1995
< Morrowind: Quests: Thieves Guild / Ald'ruhn
Jump to: navigation, search 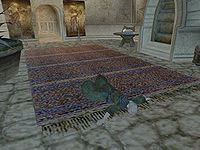 Aengoth the Jeweler at The Rat In the Pot in Ald'ruhn will ask you to steal Anarenen's Devil Tanto in the Ald'ruhn Guild of Mages, as it is apparently unguarded.

You will quickly find that the guildhall isn't completely unguarded; there is one guard in the entrance, Manis Virmaulese, who immediately engages in combat with you as soon as you enter the guild, forcing you to kill him or simply ignore him. If your Sneak skill is high enough, or you make use of Invisibility or Chameleon spells, you can easily avoid dealing with him. He'll still challenge you when you enter, but if he can't see you, he can't fight you. The tanto is in a small locked chest downstairs to the right in the alchemist's corner on the top shelf.

Return to Aengoth for a reward of, well, nothing. You can, of course, sell anything else you loot from the guildhall.